It was a cold rainy day in Culver City on February 2nd when exhibitions Way of Life II and No Broken Promises opened to the public, but art enthusiasts and fans of Kisung Koh and Jana & JS braved the weather for the opening reception. Both exhibitions featured new work by the artists that highlight their unique artistic voice and style.

Thank you to all who came out to the opening! Kisung Koh’s Way of Life II and Jana & Js’s No Broken Promises are on view now through February 23rd.

Kisung Koh’s “Way of Life II” opened Saturday, February 2nd and is on view till February 23rd. The exhibition features new works by Koh that highlights the hyper-realistically rendered and yet staged animals in abstracted or imagined spaces. The creatures acting as symbols for the complexity of life that is inexpressibly human and spiritual.

Our interview with Kisung Koh for “Way of Life II” discusses the inspiration behind the exhibition, the most challenging piece in the show, and the best advise he’s every received.

SH: For those that are not familiar with you and your work, can you give us a brief look at your artistic background and zodiac sign?-

KK:  I was born and raised in South Korea then moved to Canada in 2006. My childhood memories are full of exploring nature/looking for any creatures in nature. All I wanted to do was nothing but , study and feel their life while the majority of kids went for video games or sports. I used to bring insects home and watch them again, only to be forced to release them after my Dad told me to.. haha. Anyway, I believe these habits have led me to create their ‘world’ in my works as I got older. I feel like I went back to my childhood in my works. In addition, I see a lot of myself from nature and learn life lesson such as dealing with relationships between people many times.

I studied illustration at Sheridan College in ON, Canada, graduating with a BAA in 2012. I work and live in Toronto now. My zodiac sign is Scorpio.

SH: What inspired this latest body of work?

KK: The new body of work for ‘Way of life 2’ has initially started with my feeling in people’s relationships and my thoughts to the world we live in.

By meaning ‘ the world’ is the most diverse and complex society. We feel many emotions and struggles in many circumstances. I feel like we hustle everyday in our lives. Since I’ve spent a lot of time for myself with depression while preparing this show,  I thought about the emotions and struggle that people could feel such as love, hate, sadness, abandoned, loneliness, solitude, confusion, selfishness, and mercy. I dedicated entirely those feelings to the new body of work, and decided to call it ‘way of life’.

These works are very personal but i believe and hope that viewers can apply themselves to my works.

SH:  Is there a particular piece in this exhibition you feel really challenged you? If so, why and what makes you proud of this piece.

KK: Polar bear one. In fact, it was a totally different painting at first and wasn’t even a polar bear but a mountain lion. This painting got me through so much time and trouble when I started this. I can’t really explain but every process with this particular piece gave me a crazy amount of stress and depression. Not because of the fact that I wasn’t happy with the piece, I basically had painted a number of poses and faces of a mountain lion that I thought were right for the piece, but in the end, none of them worked. At some point, I gave it up and was about to destroy it but then went back to this piece again. Mountain lions just working here.

And I could’ve just gone away and started the next one. However, I strongly felt that I must get it right in this piece, it was like as if I had to win against the devil.  I know it sounds stupid. Again, I can’t explain and this might sound very foolish but somehow its got me more depressed every time. I was working on this, and it made me start thinking about who I am in relationships with people and society, why I think I’m always alone, why I think that I might have bad energy, my dog might not be normal because of my energy, and so on. As I’m writing this, I might regret later to reveal these negative thoughts but I want to be honest. In the end, I feel that I got the piece right.

SH:  How do you capture ideas for pieces; do you have a sketchbook on hand or is it just a note to yourself in your phone?

KK: I start to think about an animal that I like to paint. Then I create situations or stories, most of the time they are reflections of my life in a metaphorical way, then start creating the look I would be if I were this animal. And yes, I have a sketchbook on hand and sometimes I would like to take a photo or make a note in my phone.

SH: What excites you about your work / creative process?

KK: In my works, I spend a lot of time to create facial expressions of animals, in between dreamy and realistic. When I get it right, I’m happy. I also get excited when my final work looks the same that I had first. I’m sure many artists feel the same, but it’s a challenge for me to make the final work looking just like the image in your head because I sometimes change the entire mood of image or myself while I’m working.

SH: What frustrates you about your work / creative process?

KK: Hm, I think making a ‘right'( for me) image and mood that a piece shows is the challenge. Maybe I think I’m too picky most of the times. It’s also challenging to make the right ‘look’ on the animal’s face.

SH:  What do you think the role of artists is in society? How does other artwork inform how you move through life?

KK: I can’t answer this question, because I think the role of artists in society has so many and I agree with most of them.  All I can say is it’s essential in our life.

SH: If your body of work inspired an ice cream flavor, what would it be called and what are the ingredients?

KK: “Believe in yourself”

SH: Favorite way to celebrate the completion of a project/body of work?

KK: I want to have beautiful times with my wife and my two dogs. They are my everything in Canada.

(Los Angeles, CA) – Thinkspace is pleased to present new works by Southern Korean, Toronto-based artist and illustrator Kisung Koh in Way of Life II, the artist’s first solo exhibition in the gallery’s main space. Koh creates an allegorical universe through which to explore human loss and longing. The animal subjects in his paintings are laden, haunted, in a way, by a parabolic significance beyond their nature. Hyper-realistically rendered but staged in abstracted or imagined spaces, these creatures become emissaries of a spiritual dimension. Inexplicably prescient as both surrogates and revenants, they’re split between past and present tenses, animated by memory, the insatiable pining of nostalgia, and the impossible projections of fantasy. In search of the spiritual in nature, Koh’s emotionally heightened naturalism stages the animal as a manifest vehicle of the inexpressibly human.

Born in South Korea, Koh moved to Canada in 2006. His earliest childhood memories are of exploring rural settings where he grew up in Korea, a place that has fostered his lifelong love and attachment to nature. Koh studied illustration at Sheridan College in Toronto, Canada, graduating with a BAA in 2012, and works professionally as an illustrator in tandem with his fine art practice. He has exhibited extensively in group shows internationally, though Way of Life II is only Koh’s third solo exhibition to date. Inspired by the intersection of nature, memory, and dream, his world of imagery is an extended metaphor for the personal and intrapsychic struggles in which our modern humanity is mired.

The artist describes an early experience of witnessing a family of deer at close distance in the wild, and the inexplicable ‘presence’ of the spiritual harbored within nature, often thought to be an ingress or gateway to the spectral or supernatural. The animal world attentively and lovingly brought to life by Koh, is steeped in this inscrutable magic. He accesses an ancient and collective impulse towards the enigmatic displacement of the human onto the animal found in myth and archetype; a storytelling convention and psychic tool shared, since time immemorial, across multiple locations of culture and place, perhaps due in part to the animal exemption from language and its self-conscious legacy of human bondage. Koh projects affect onto the creature threshold, dramatizing a world of animal proxies to explore mortal fear, loss, hate, dislocation, isolation, mercy, and love, in the absence of any divisive human ideologies of belonging.

In Koh’s works, the inexpressible elisions of language are given a tangible, universally approachable guise in animal form. In previous bodies of work, he has explored elephants, deer, fox, owls, tigers, and has even dedicated an entire series of peaceful portraits to the itinerant polar bear, personally moved by the tragedy of his forced nomadism and rapidly receding habitats. Hoping to inspire pause, appreciation, and an increased awareness of our responsibility to protect the nature in our midsts, Koh’s dramatically high contrast and yet simultaneously diffuse and dreamlike works in oil, oscillate between the idyllic and the unsettling.

In Way of Life II, Koh considers the necessity of interrelationships, and the fundamental exclusions and reciprocities established between creatures in wild coexistence to survive. Koh hopes to encourage the viewer to question the basis of these exchanges and to think about how we occupy its propositions. Are we aggressors and predators, or hapless victims? Or, as is more generally and imperfectly the case, a complex and unreconciled embodiment of the two. 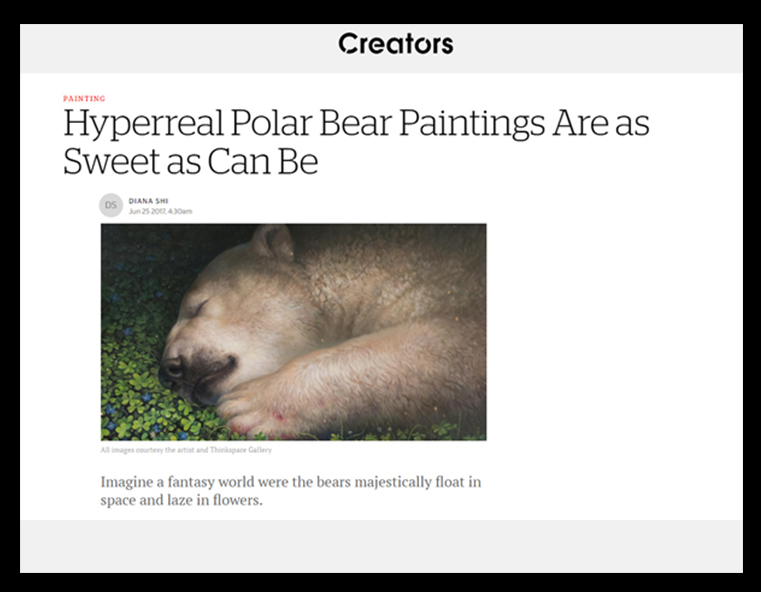 Vice Media’s Creators recently featured Thinkspace Gallery artists Kisung Koh. In the article ‘Hyperreal Polar Bear Paintings Are as Sweet as Can Be,’ the site highlights several pieces from his recent exhibition with us, Long Live The Polar Treasure. A nearly sold out exhibition, the third piece featured in the article, ‘Like the Crescent Moon’ is still available at the gallery. Interested parties can contact contact@thinkspacegallery.com if they are eager to add this sweet piece to their collection. 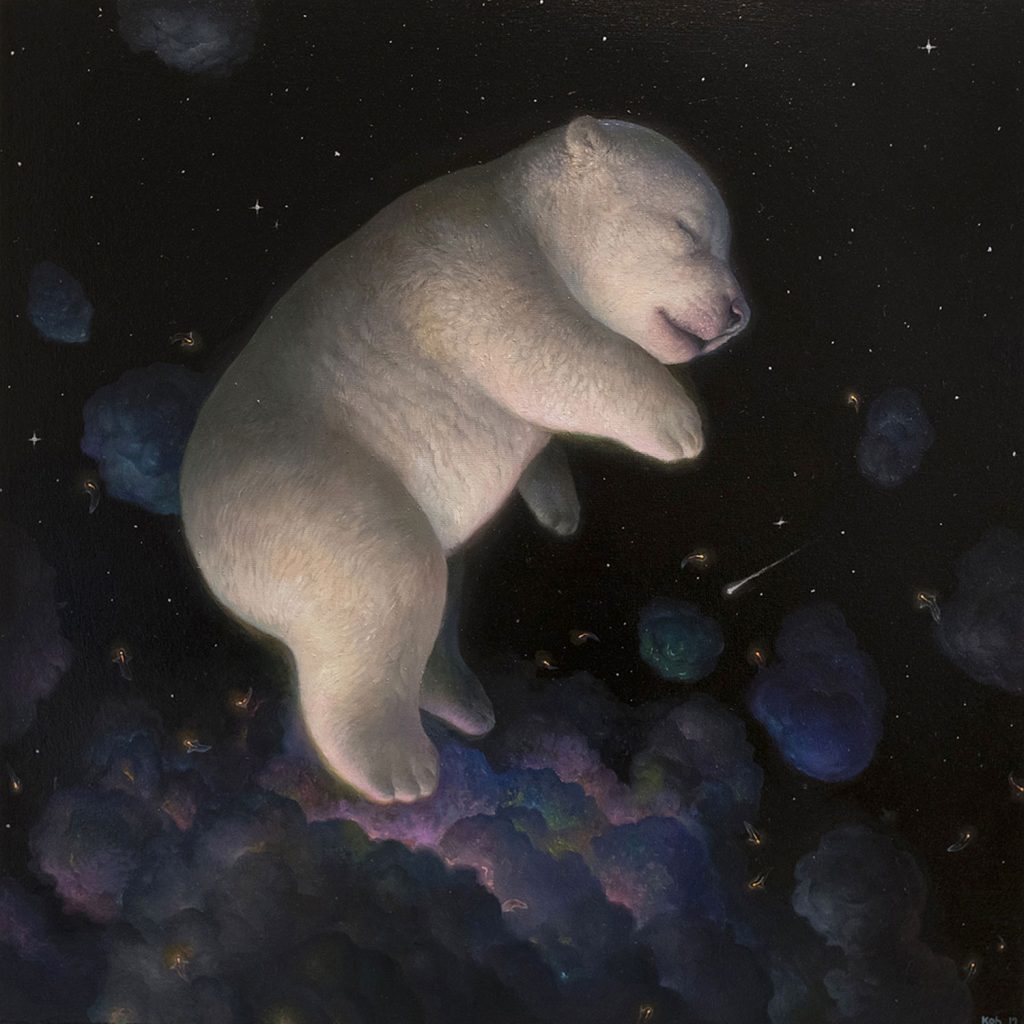 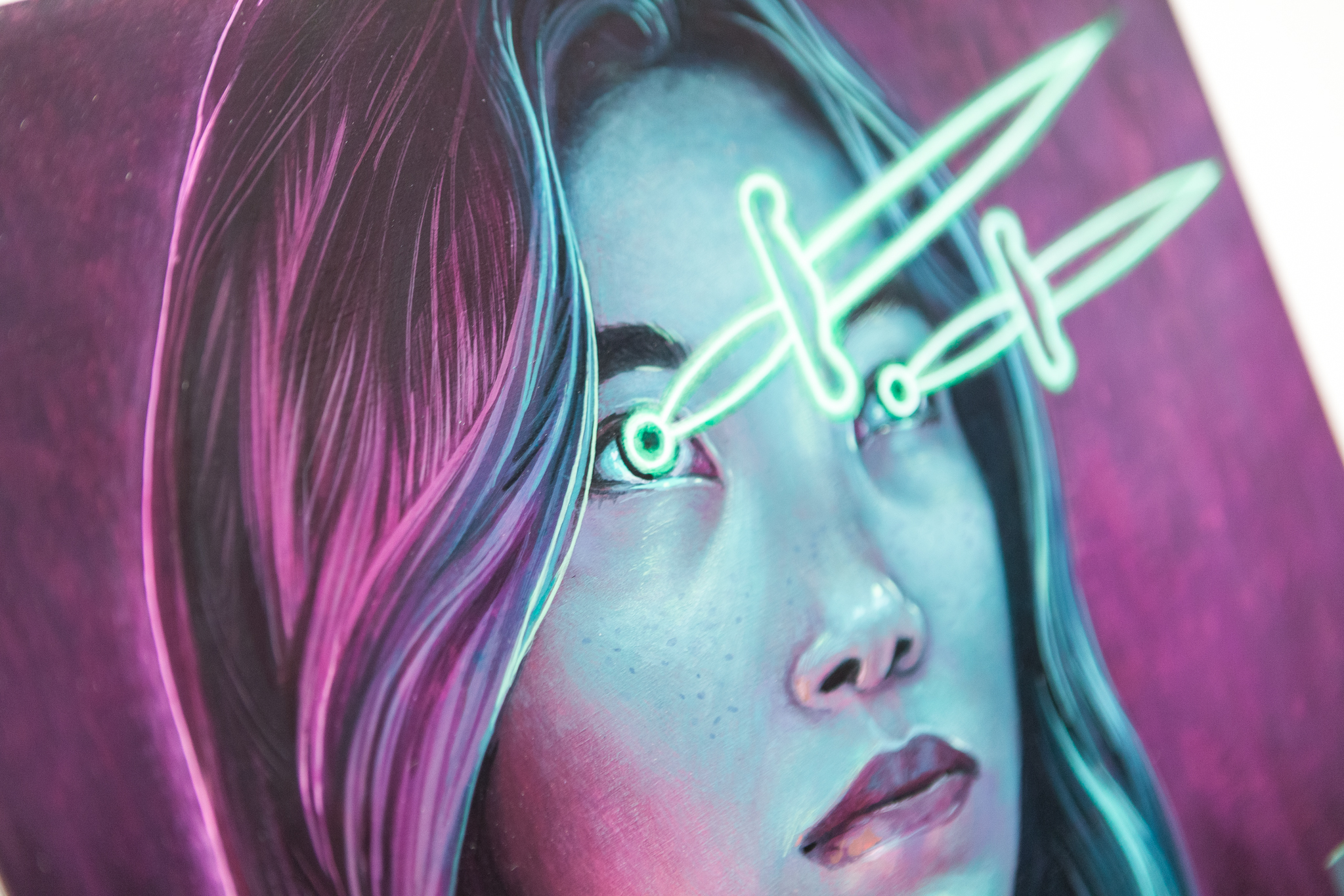 The opening reception of Casey Weldon’s ‘Sentimental Deprivation’ and Kisung Koh ‘Long Live the Polar Treasure’ landed on a night Los Angeles was pulsing with interesting art events, yet both artists still drew fans and art lovers to Culver City.

Many pieces from Casey Weldon‘s neon-wonderland sold before the opening, yet some stunning works are still available for interested collectors. KiSung Koh‘s also sold work the night of the opening and his nearly sold-out exhibition still has a few pieces available. Drop by the gallery while both exhibitions are on view now through June 24th. 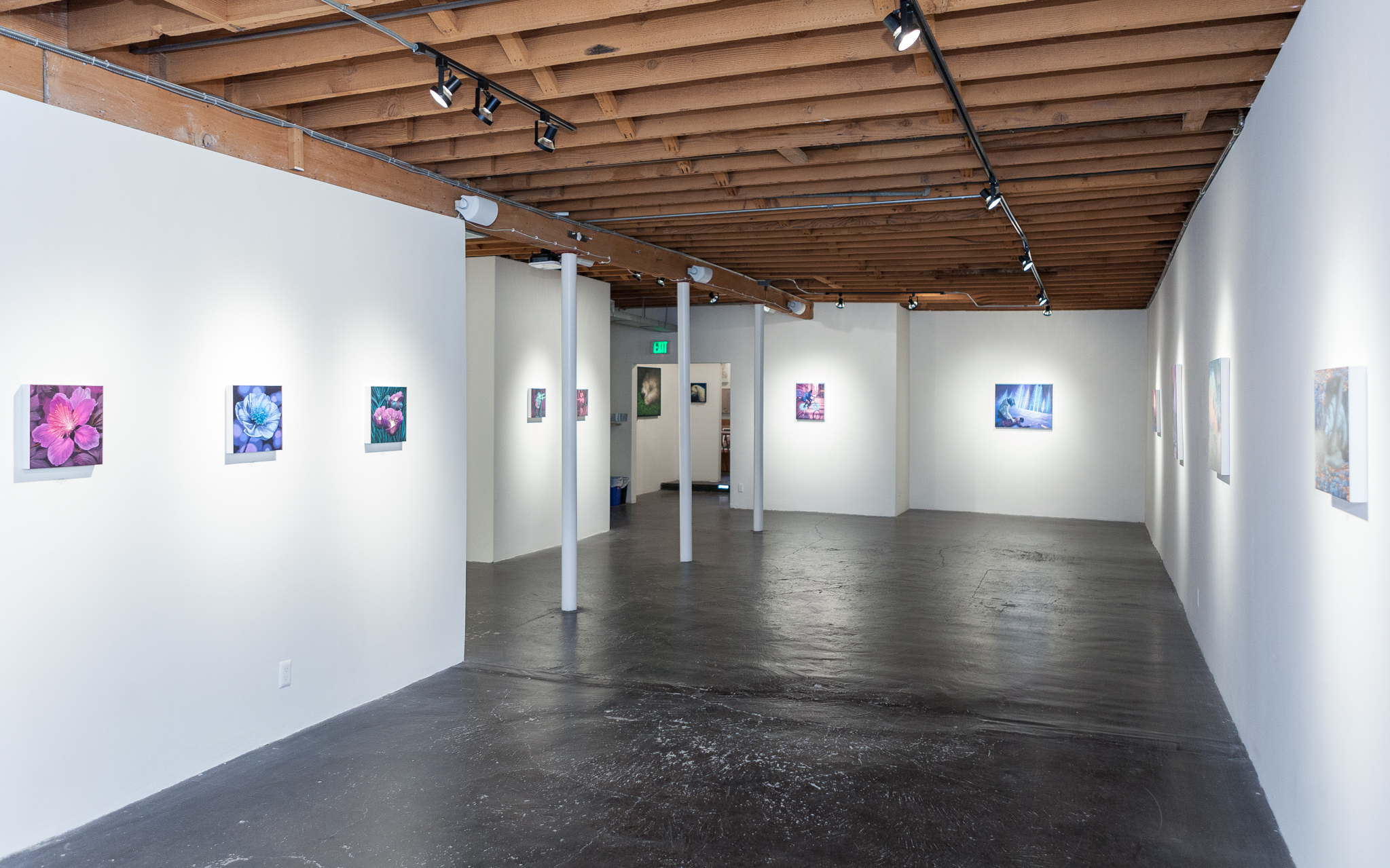 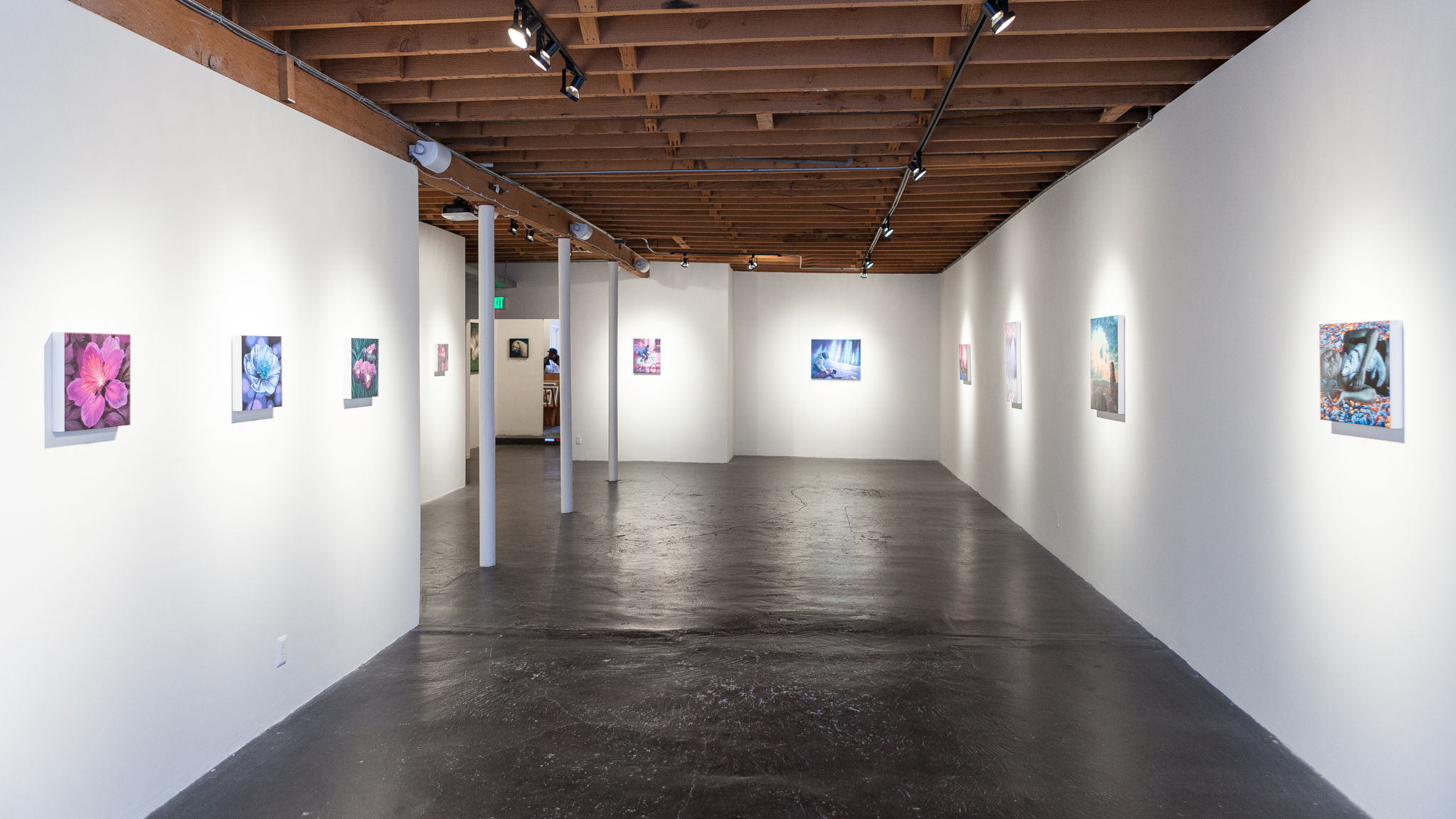 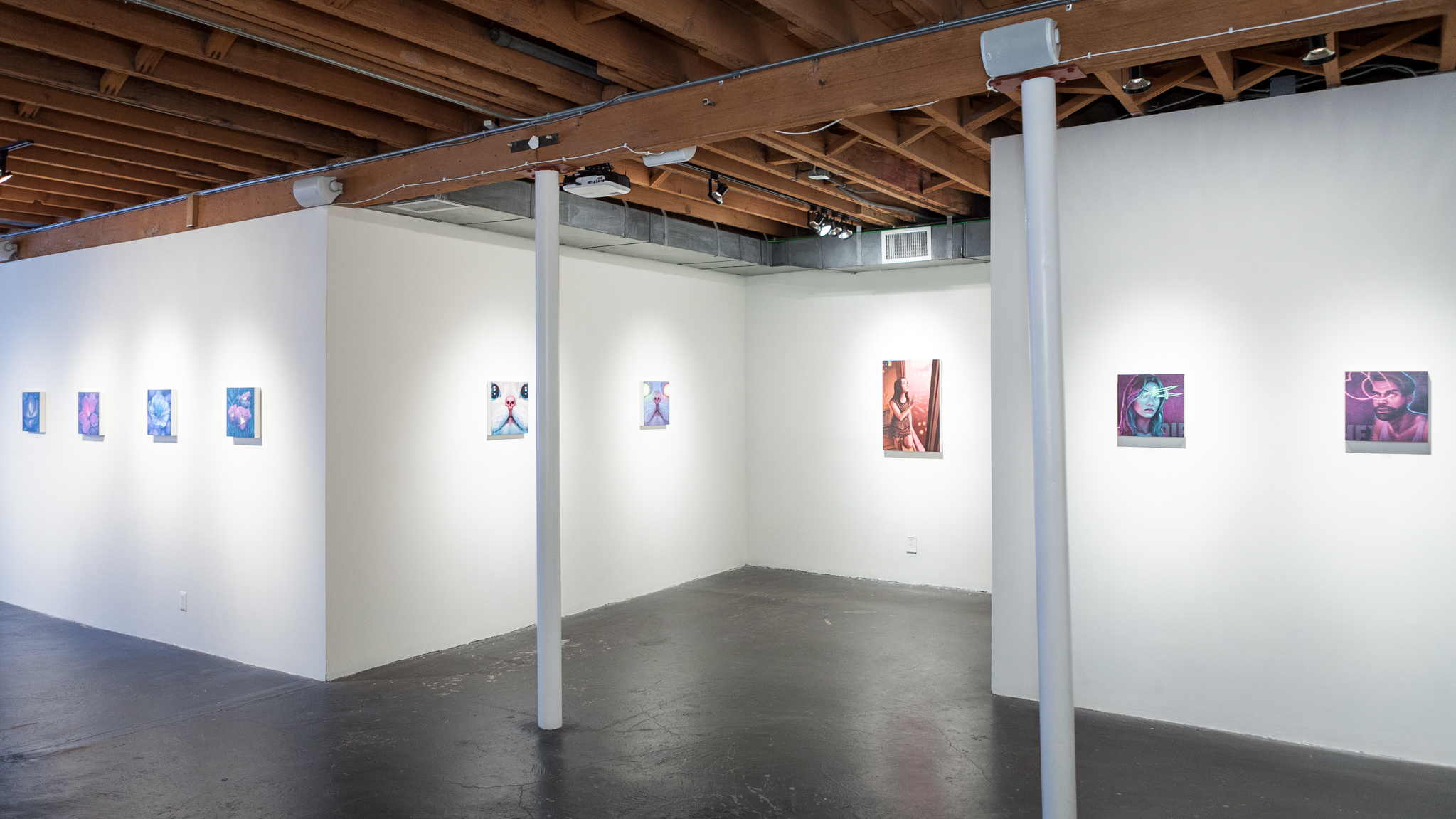 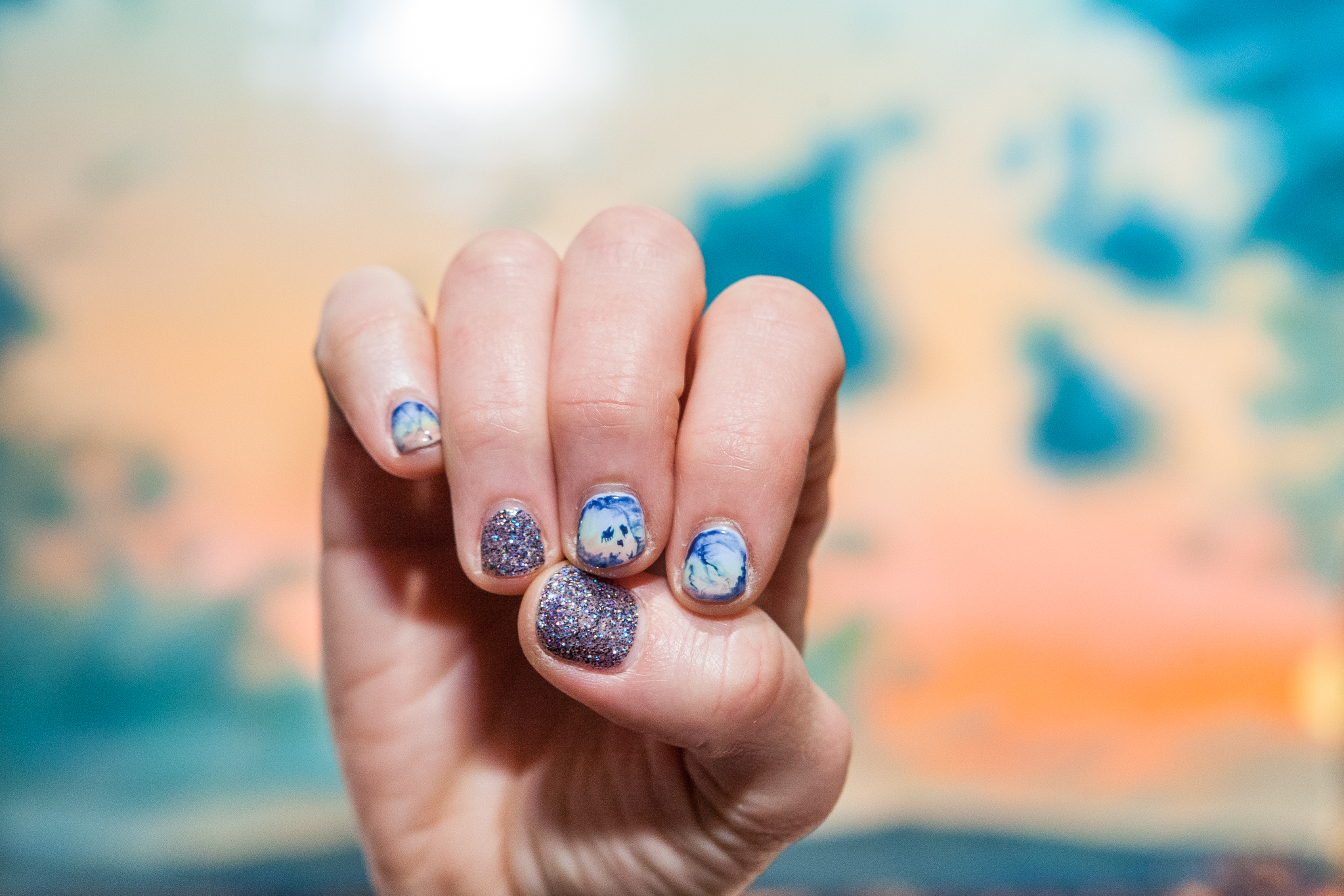 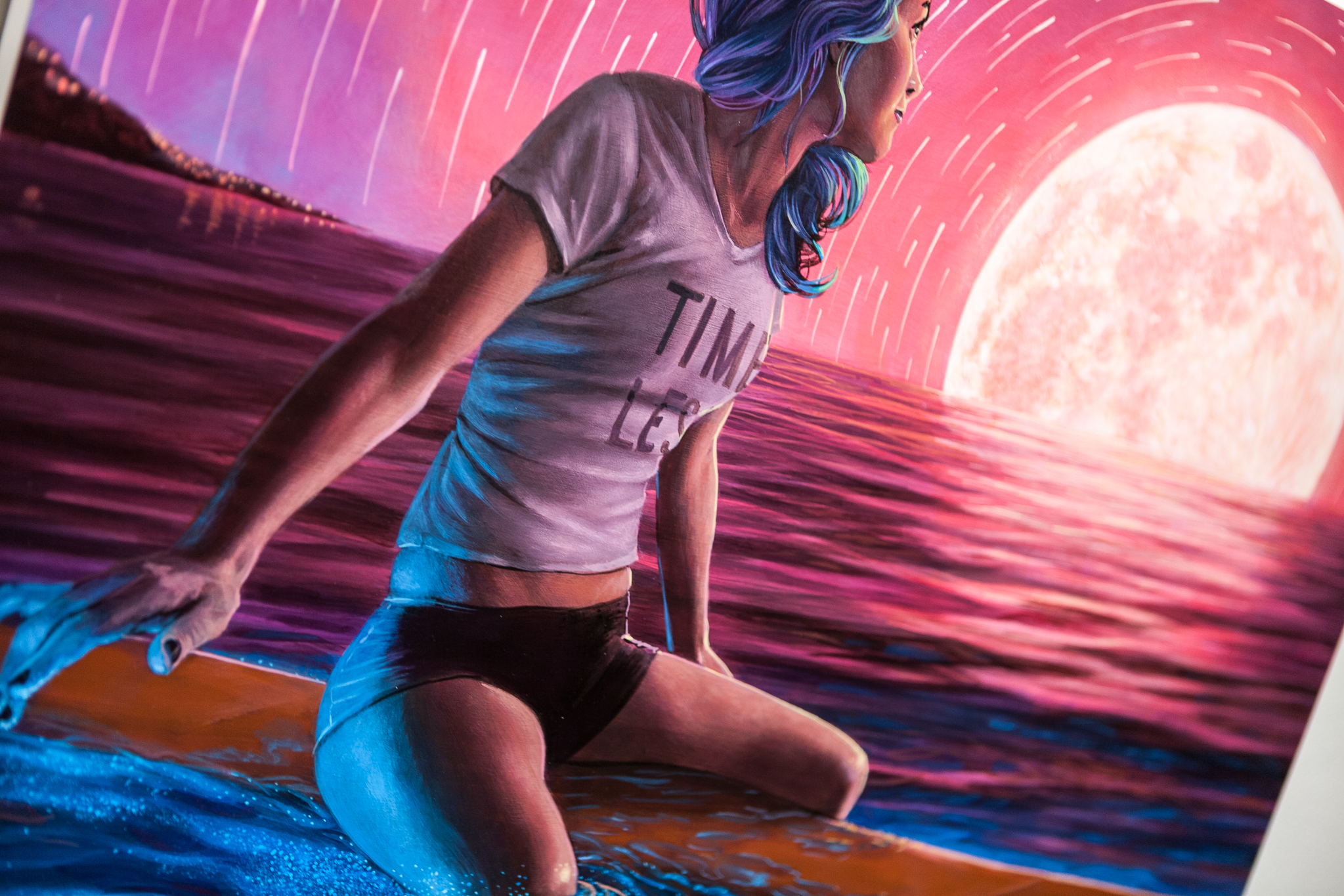 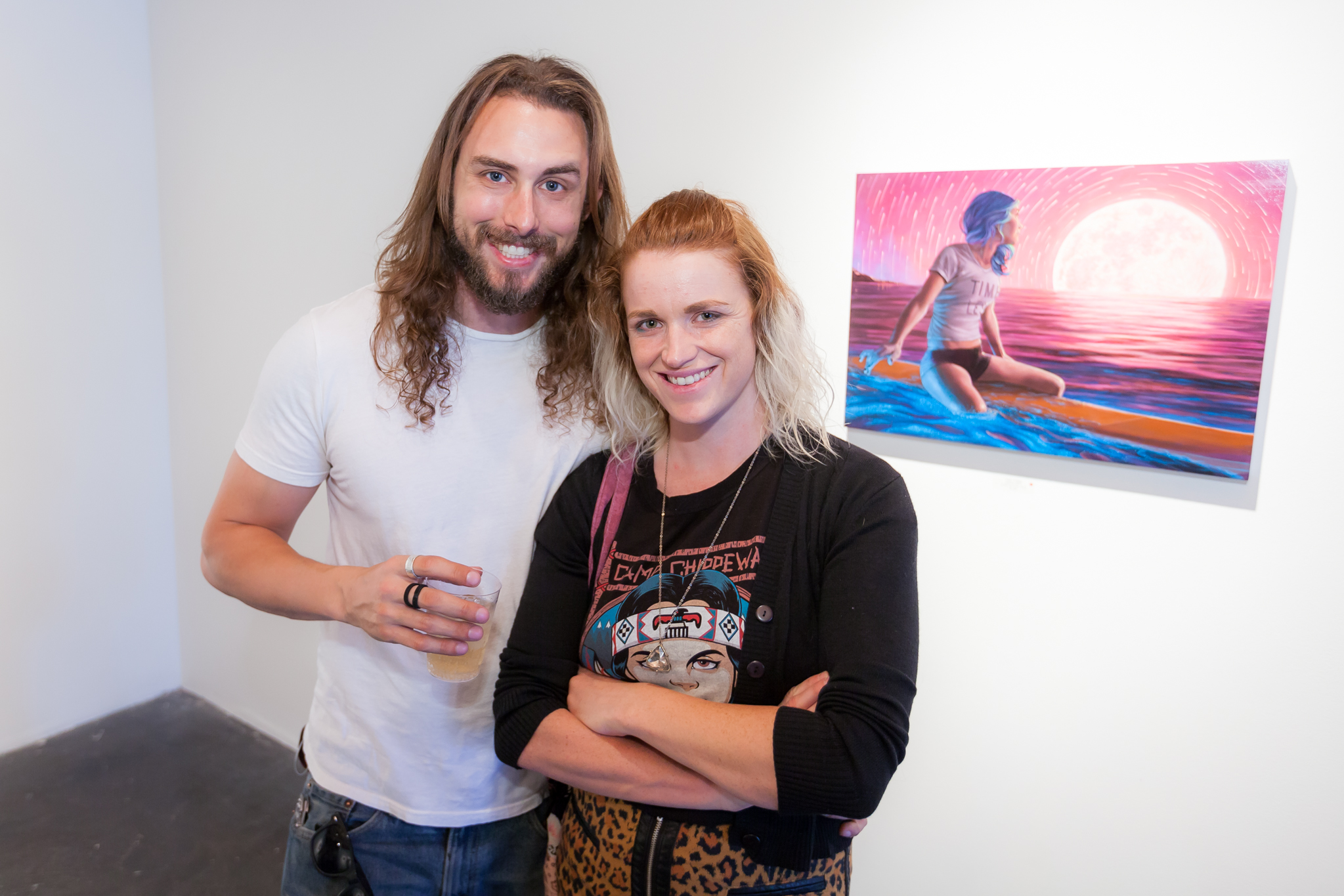 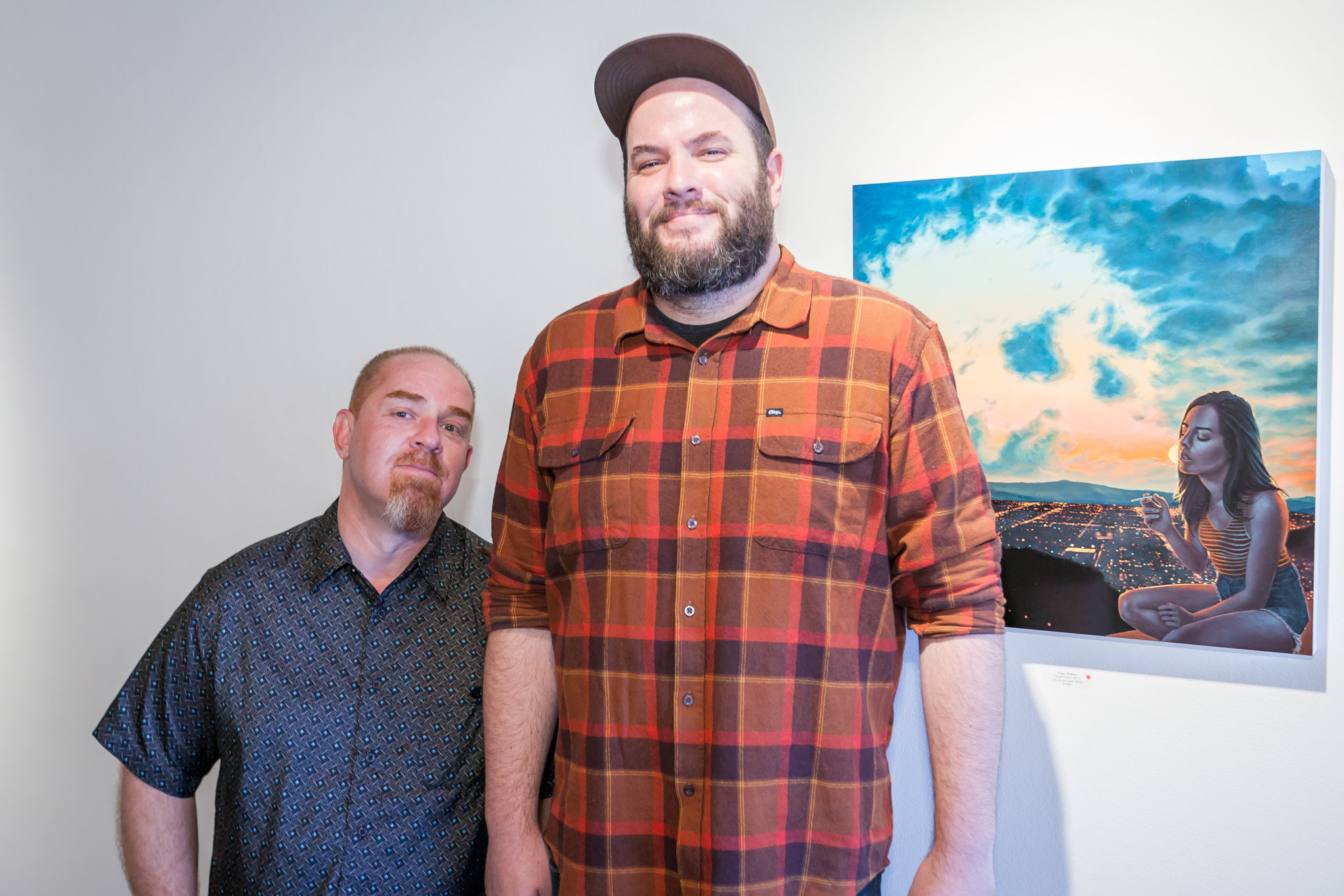 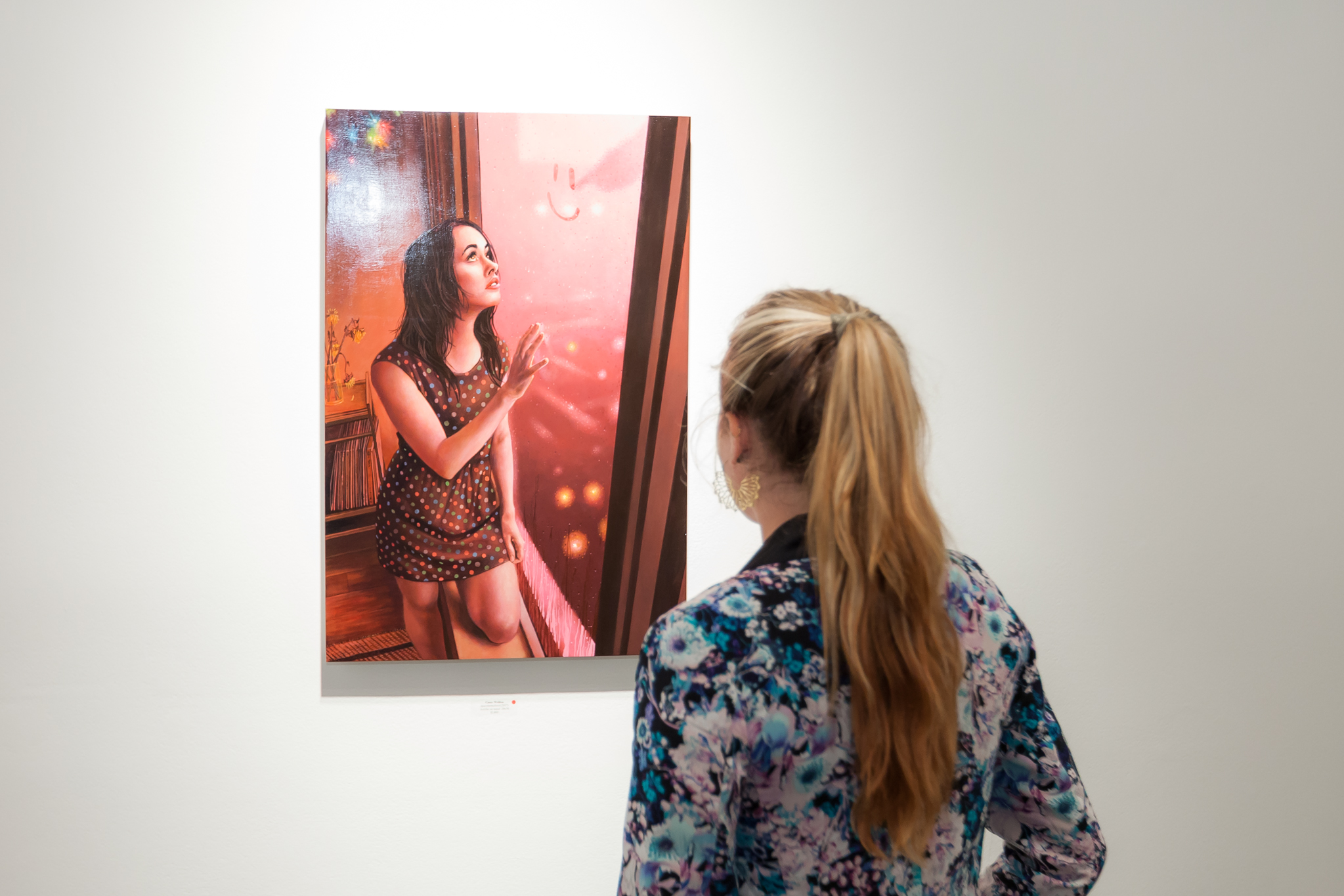 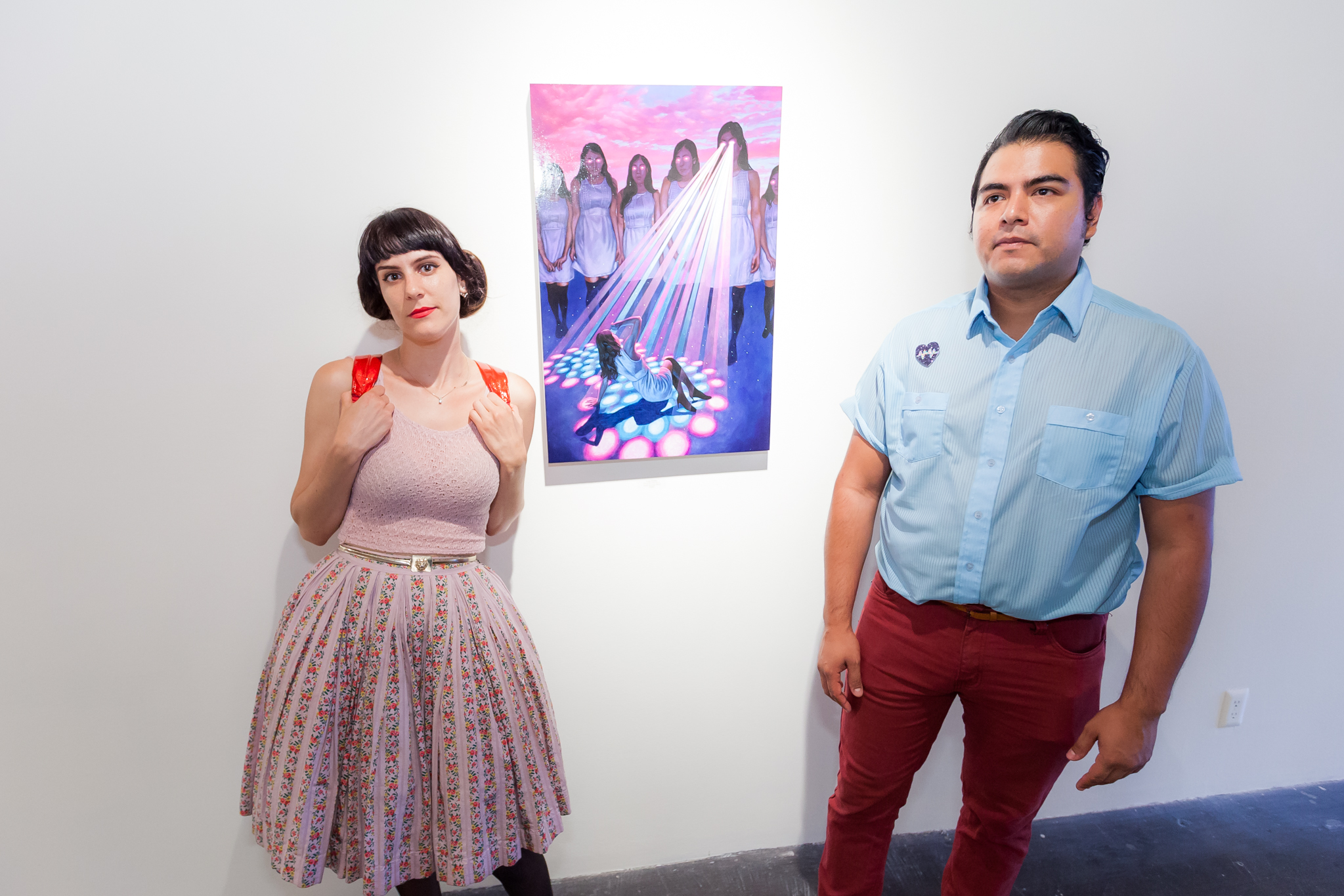 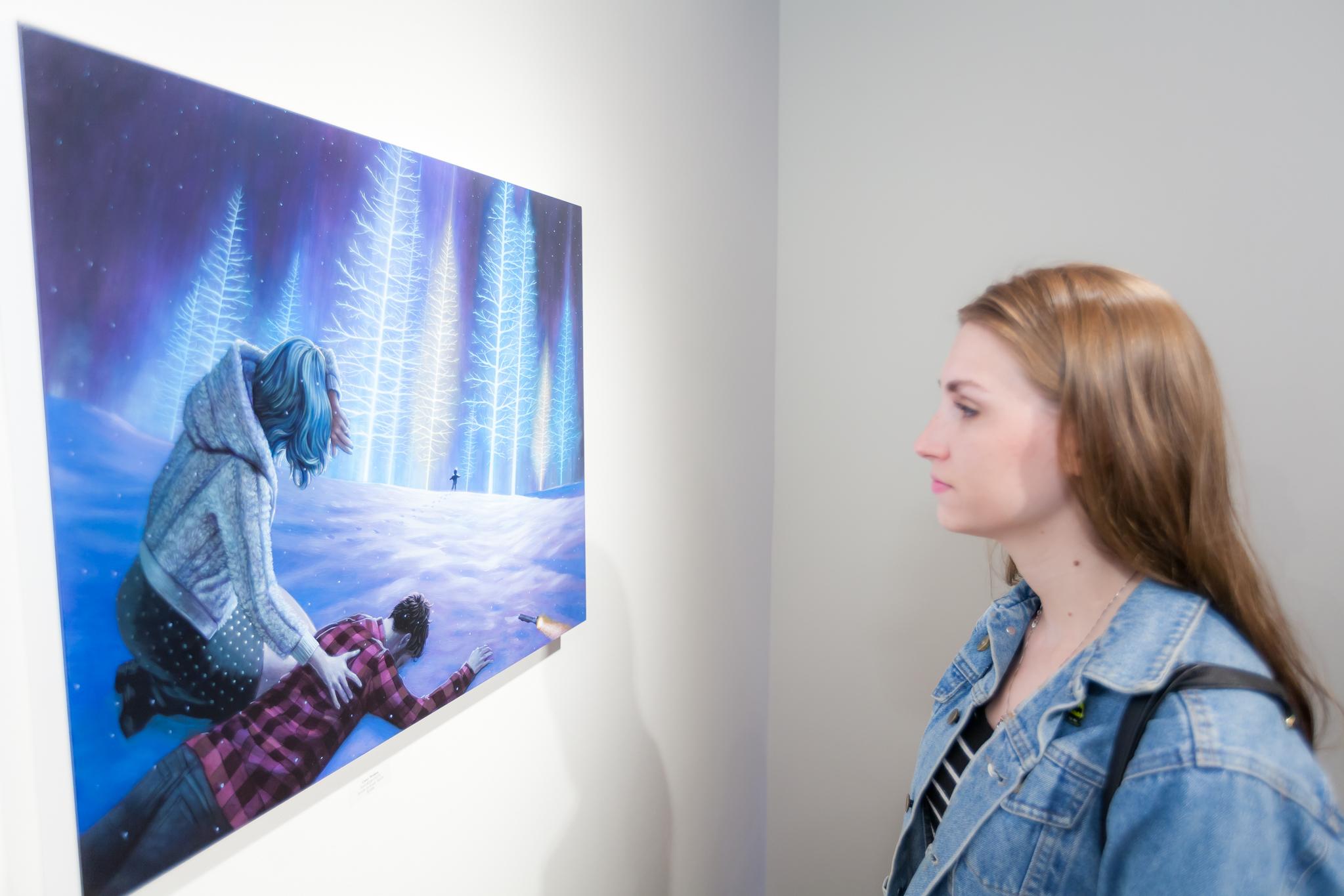 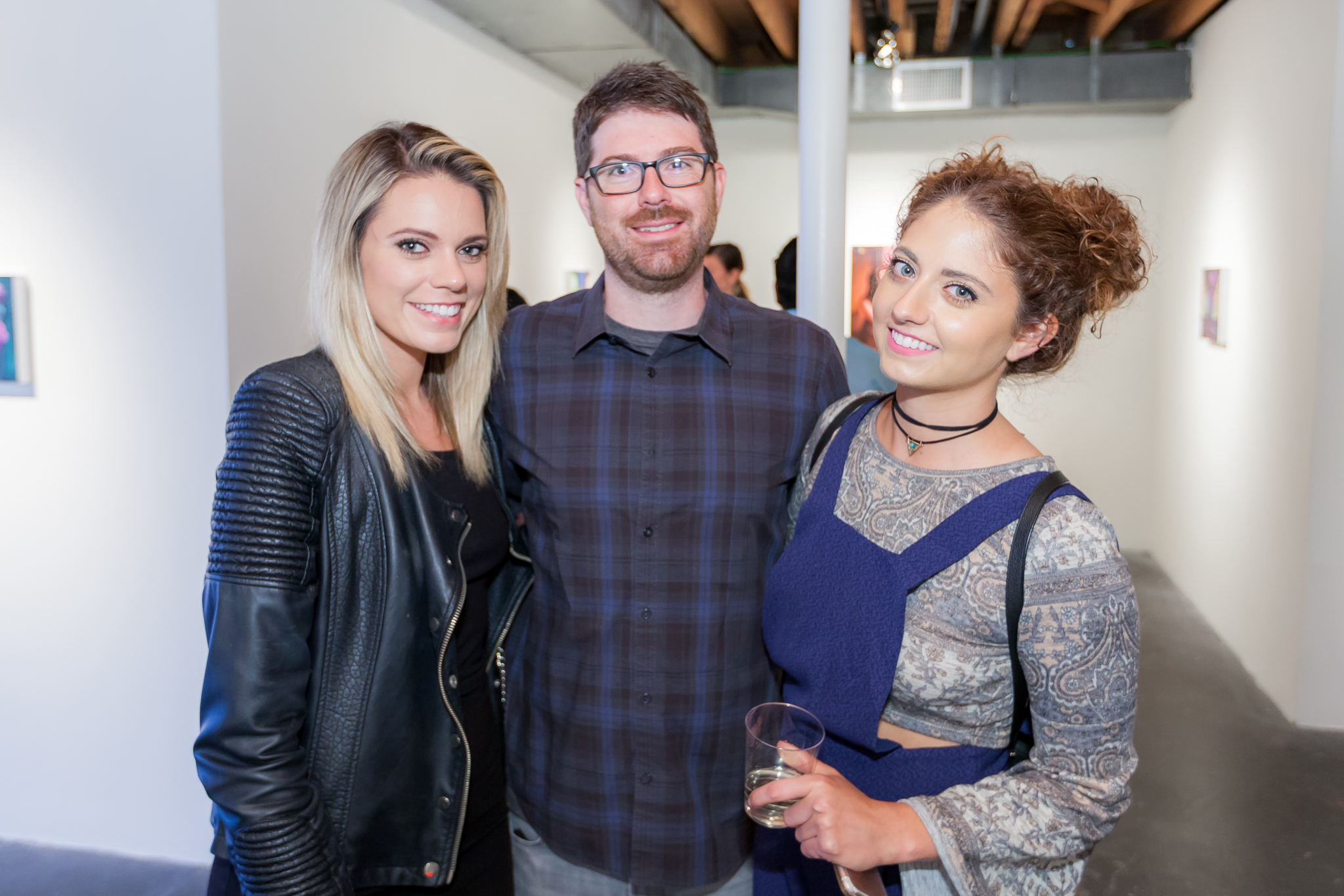 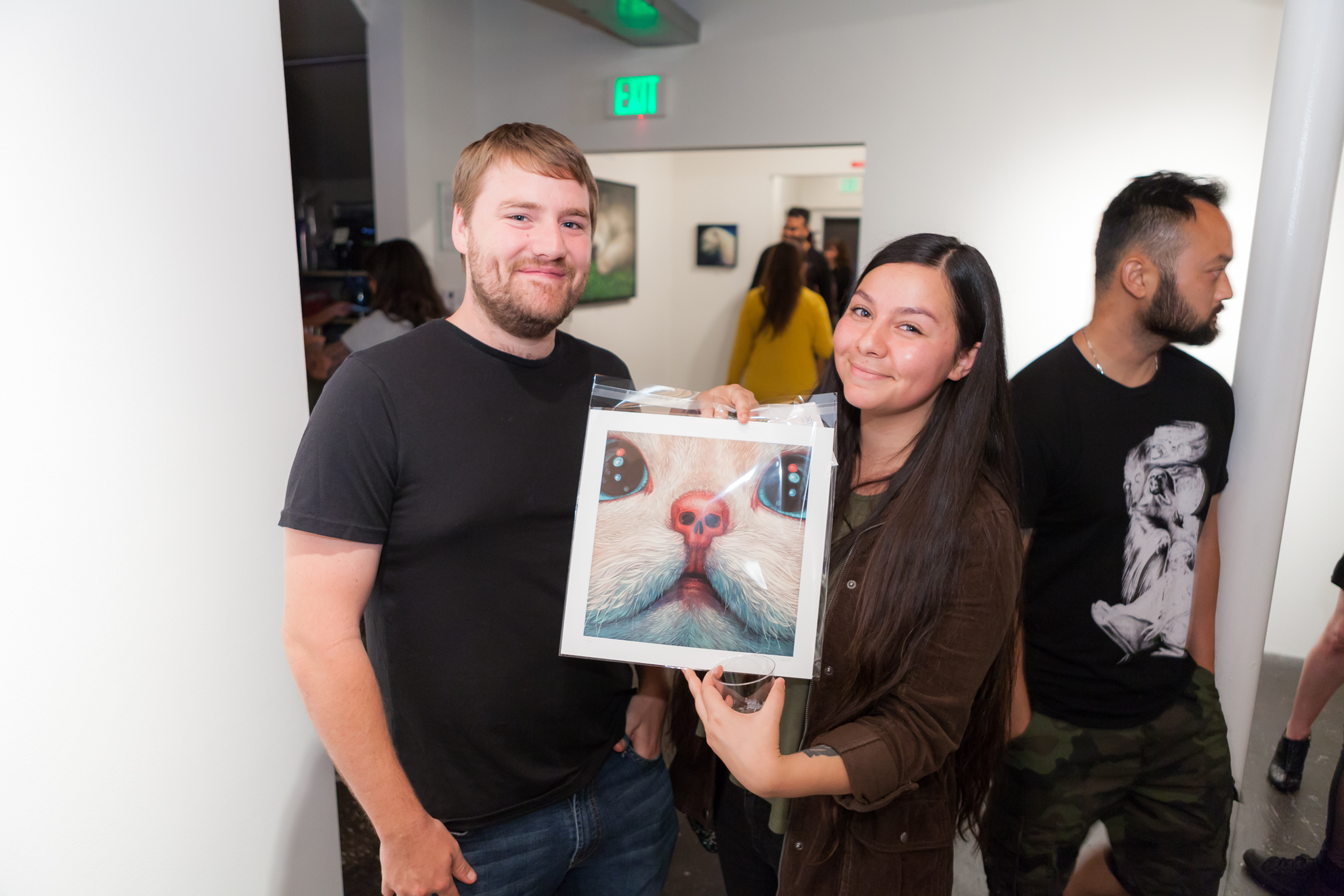 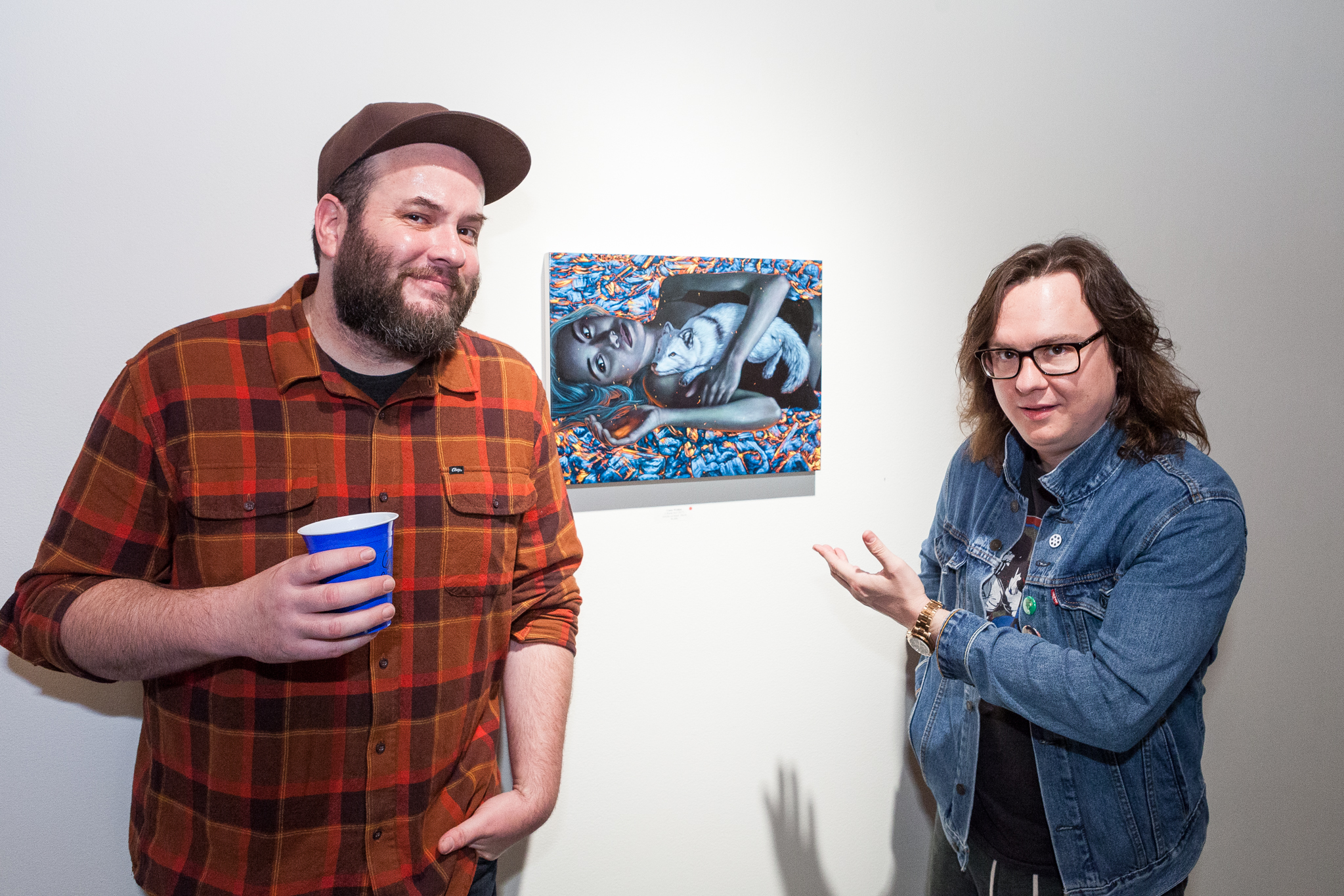 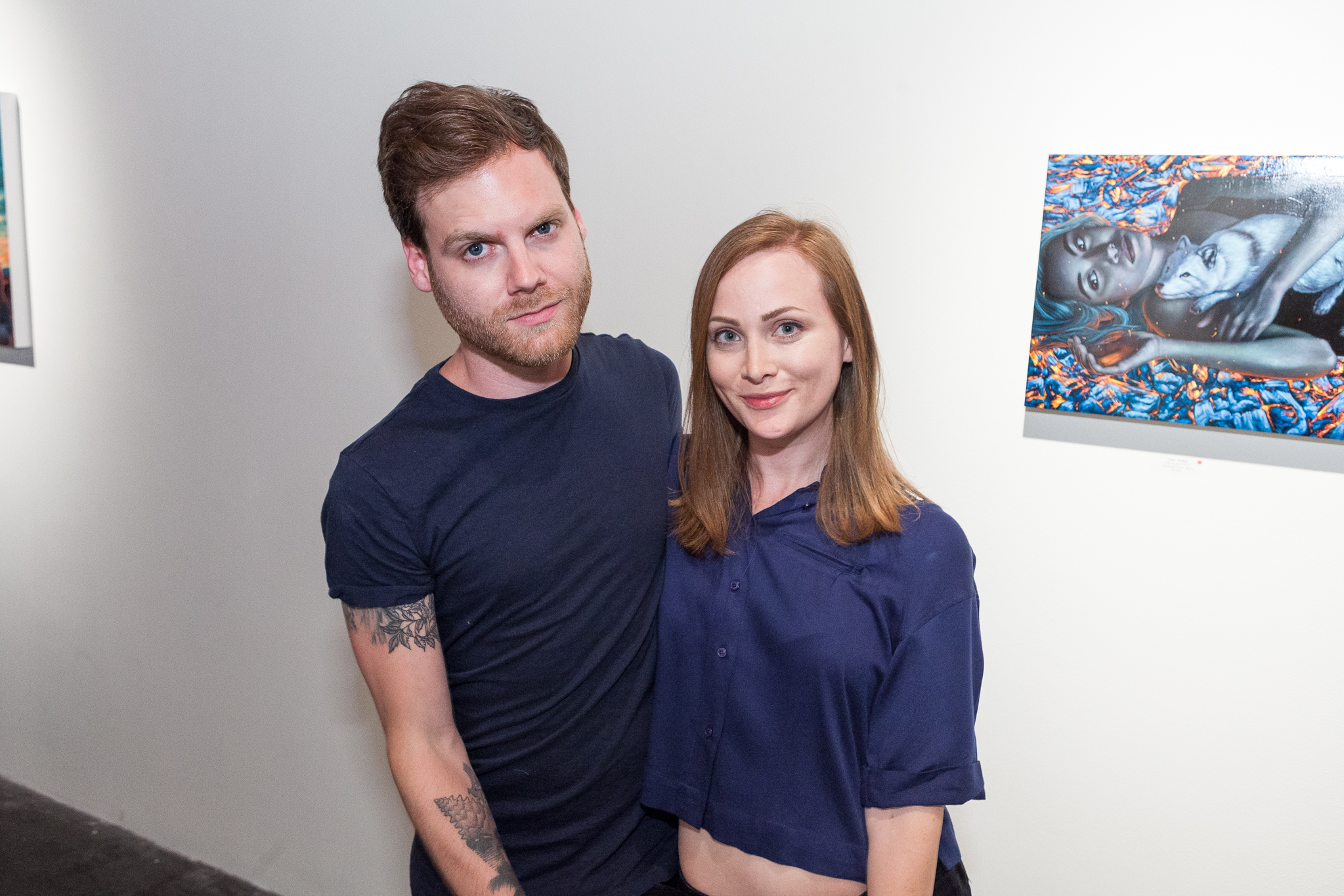 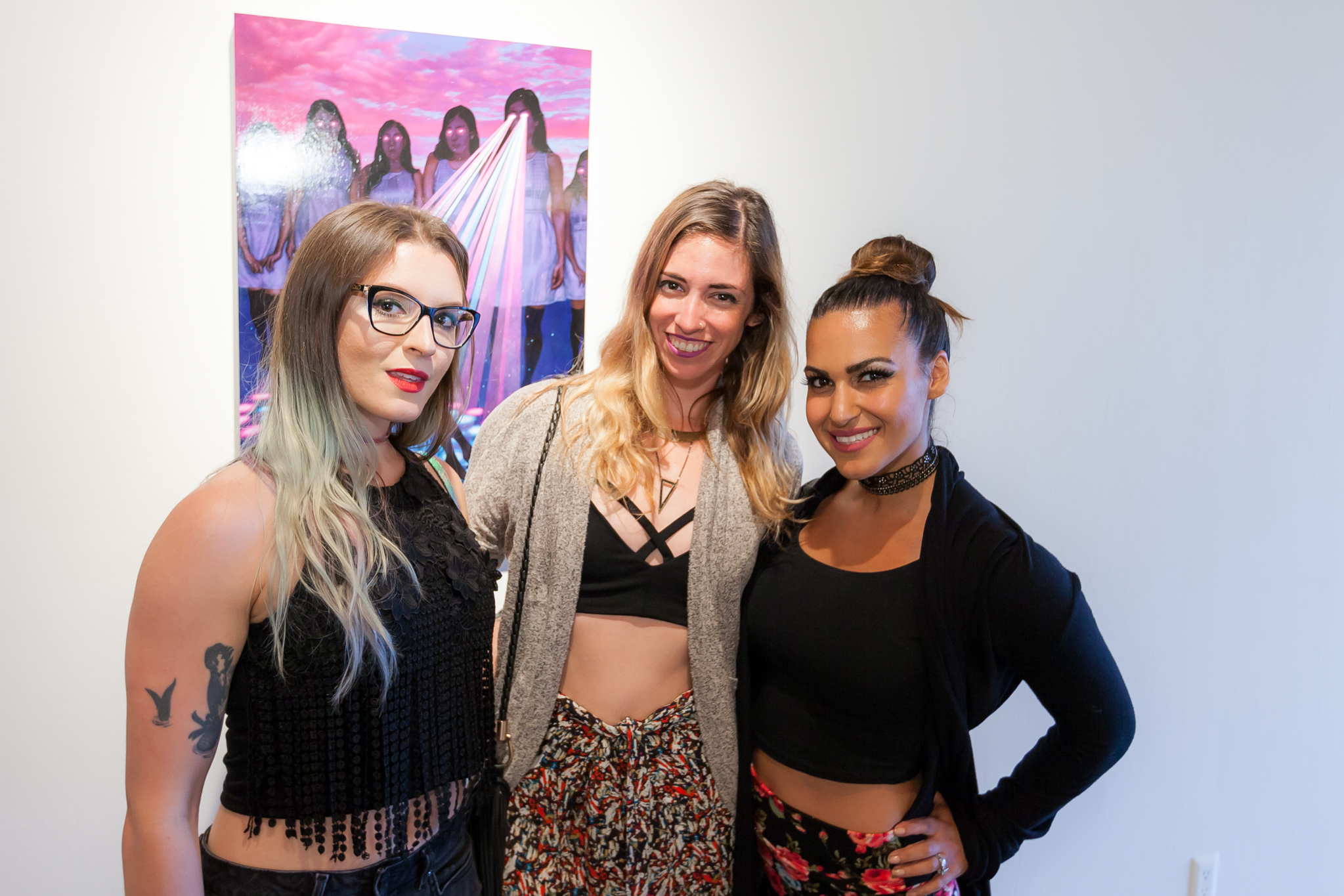 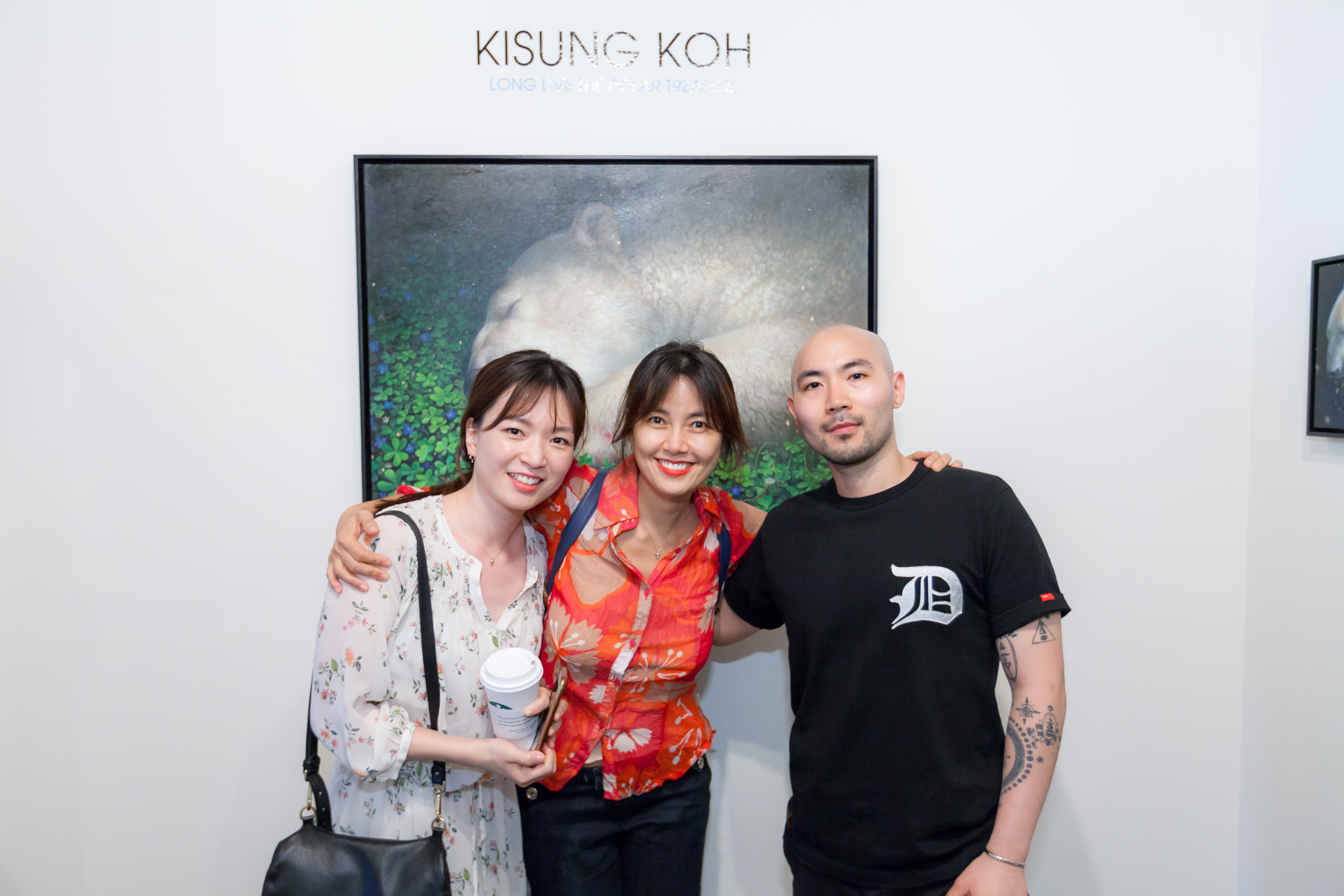 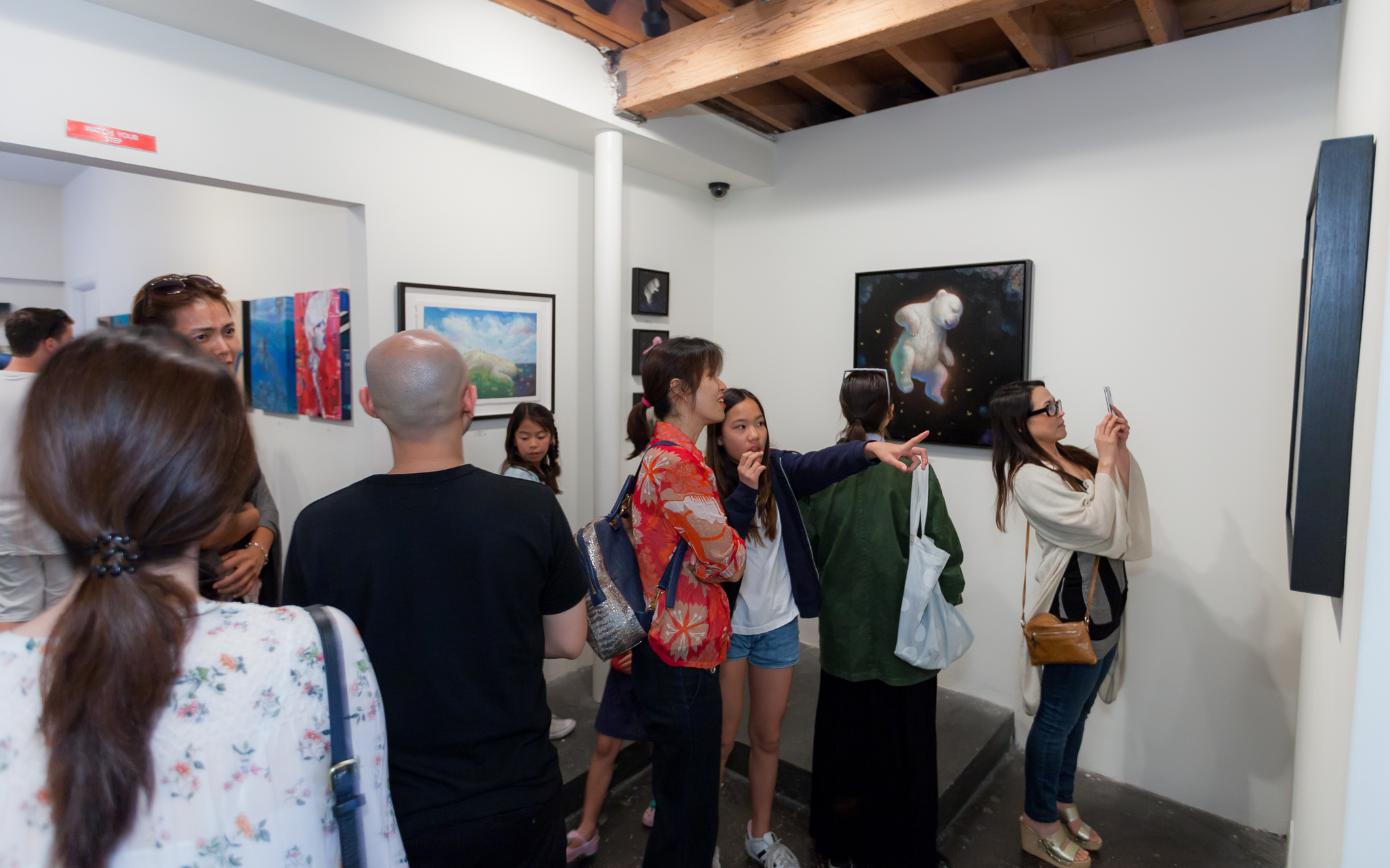 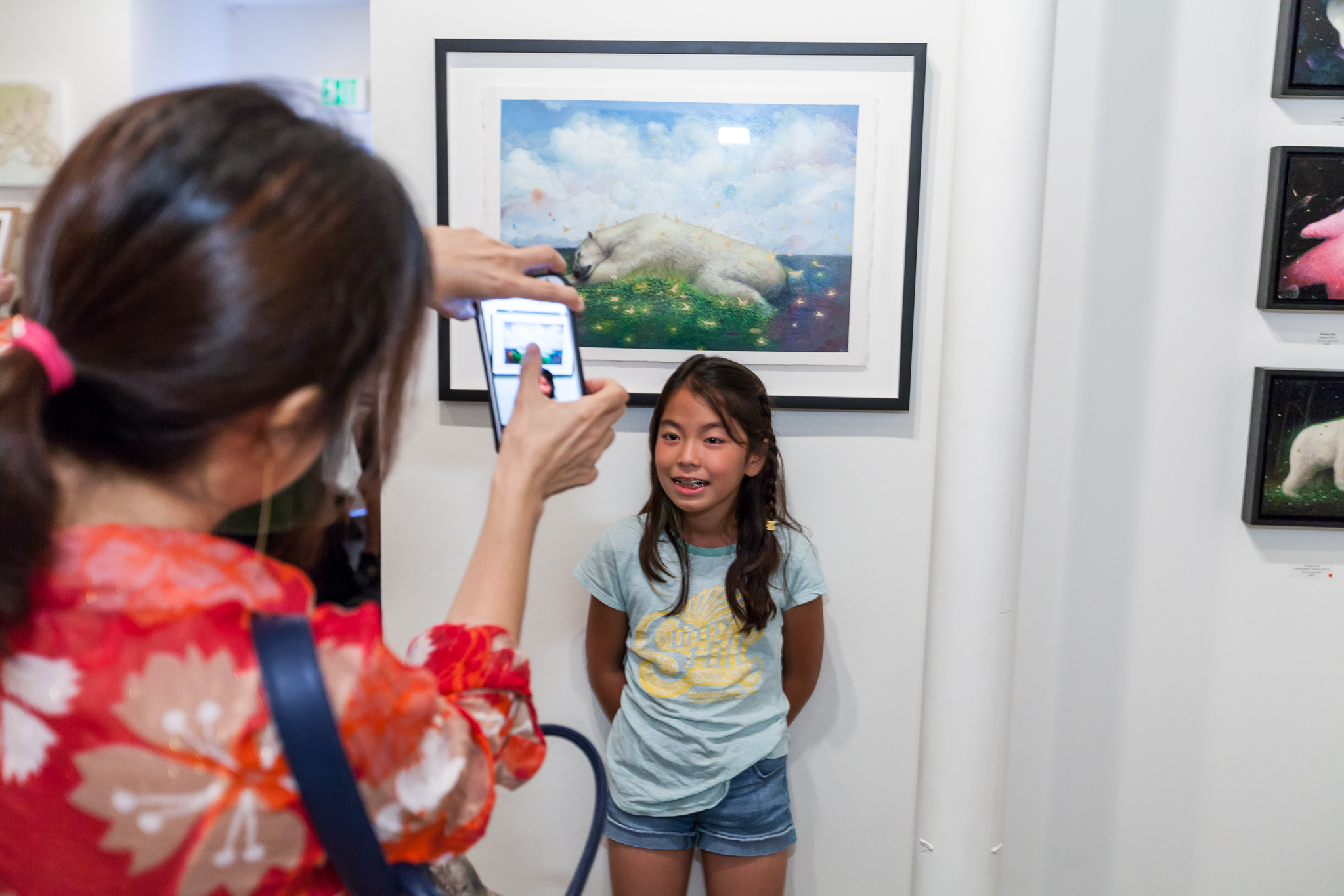 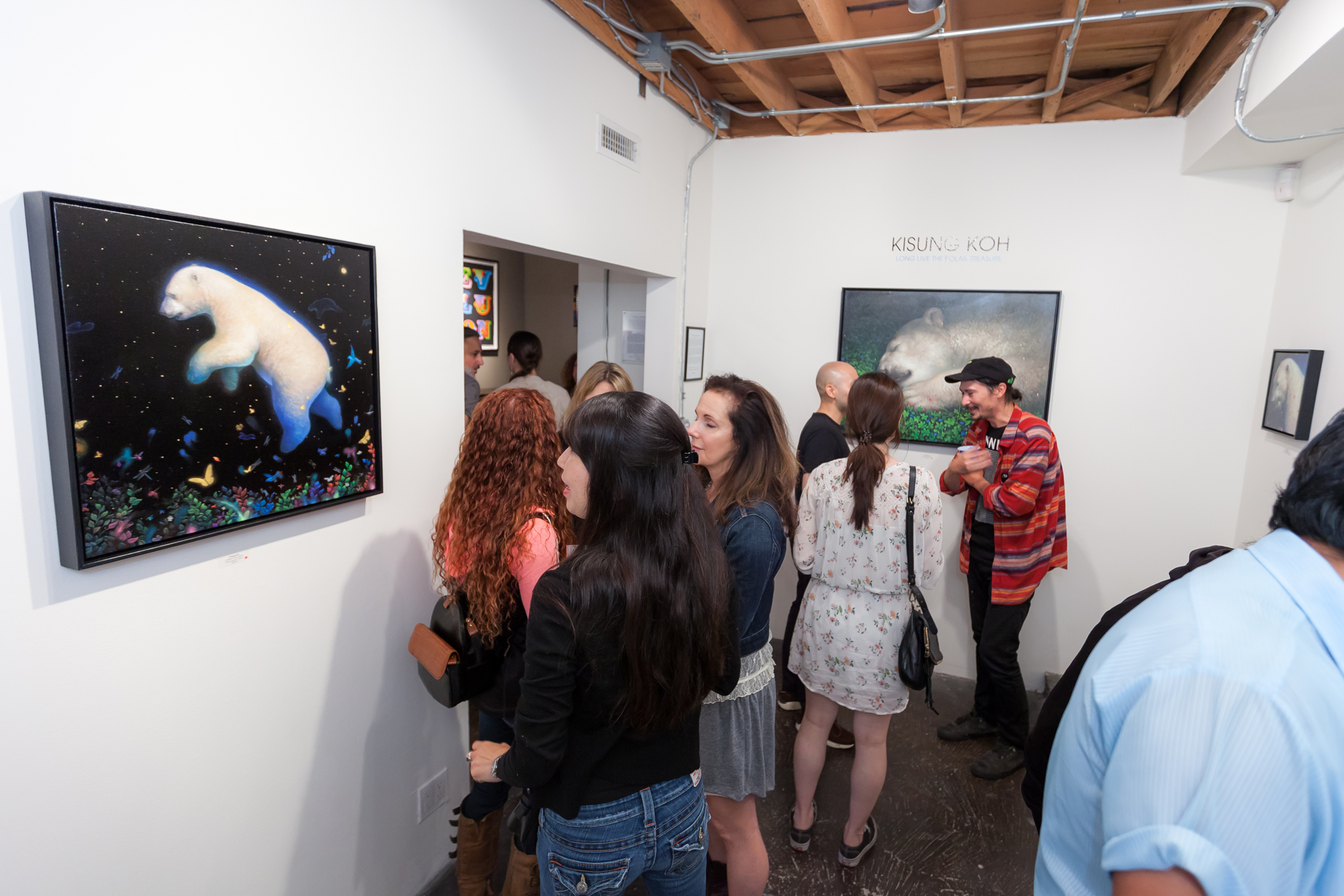 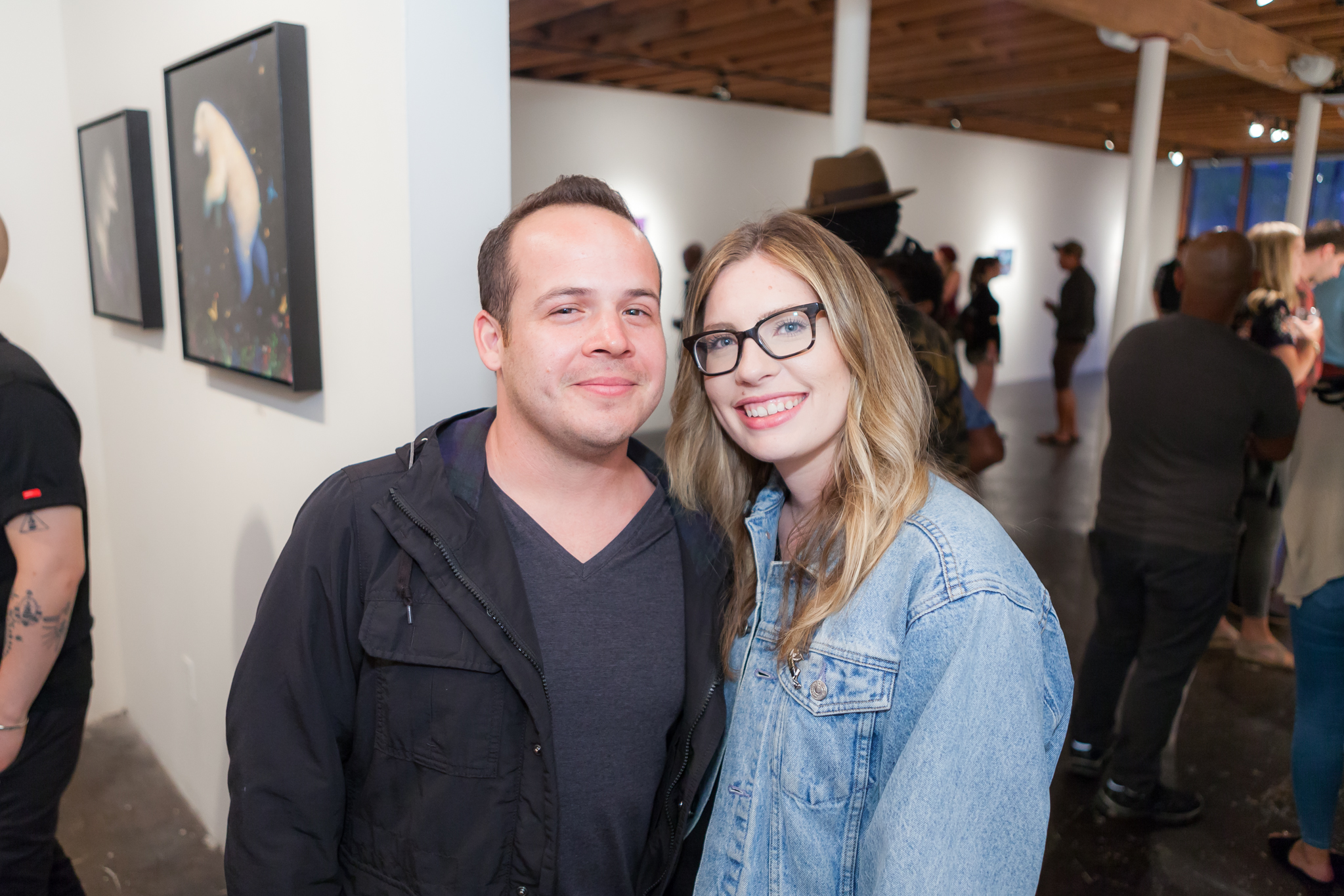 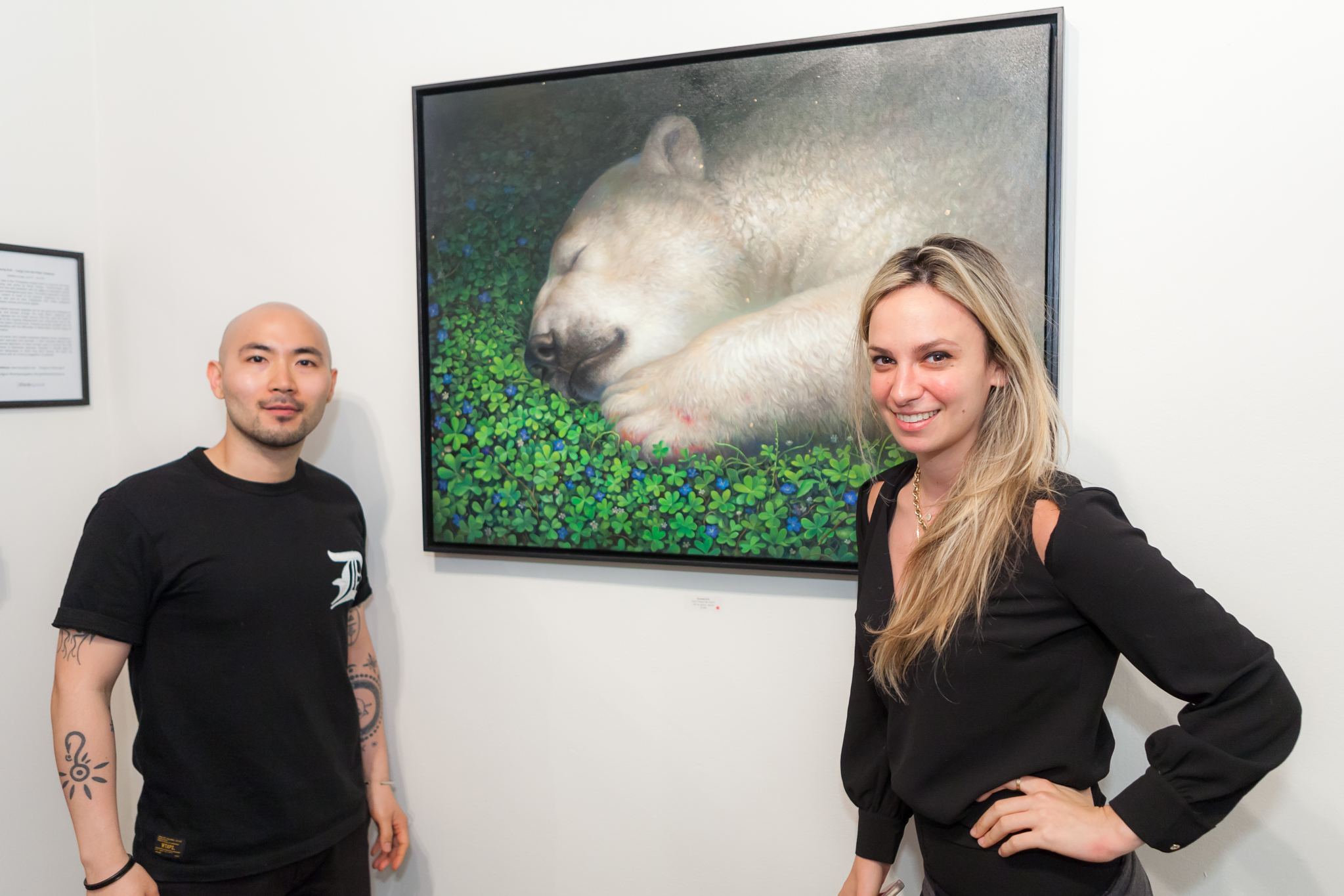 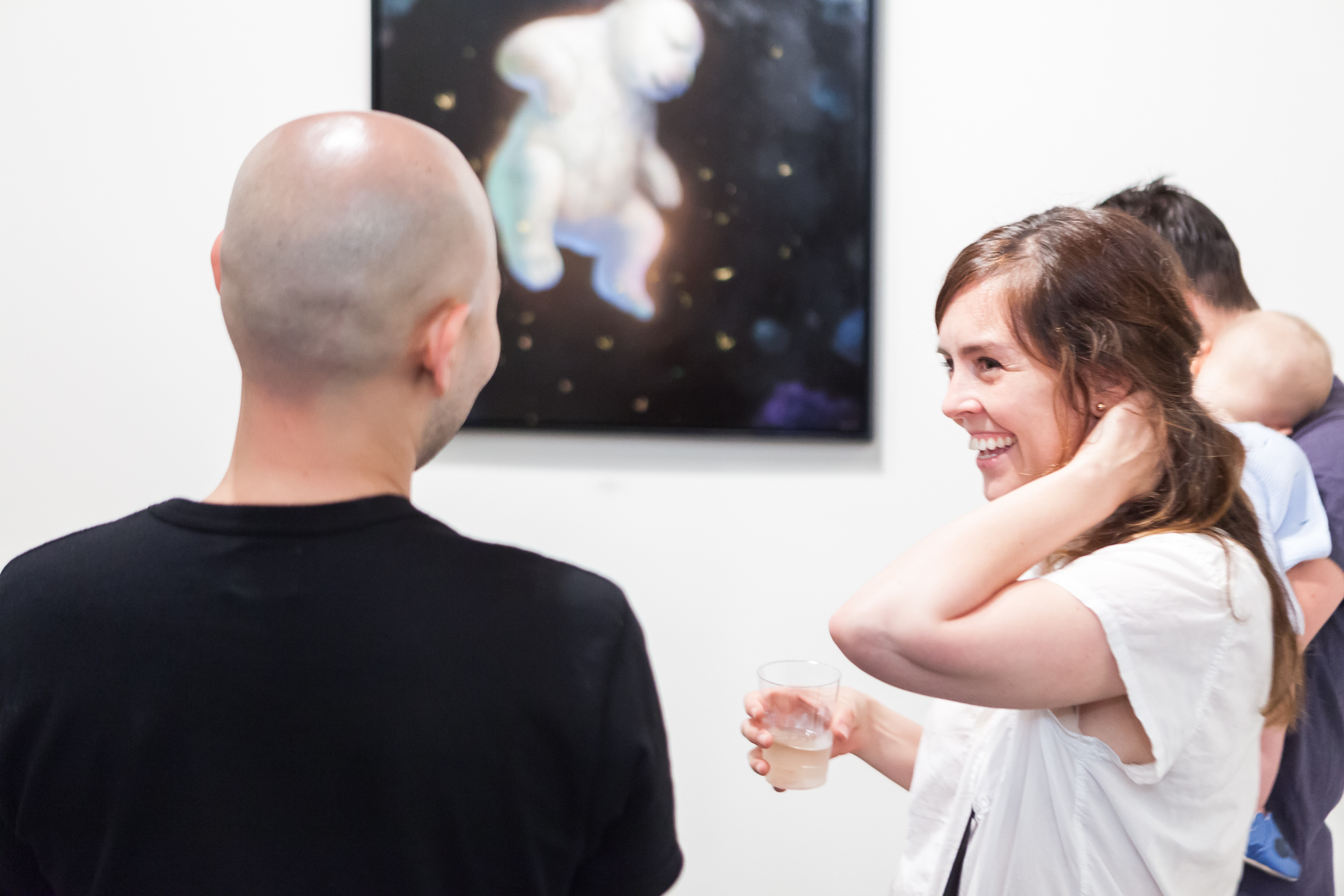 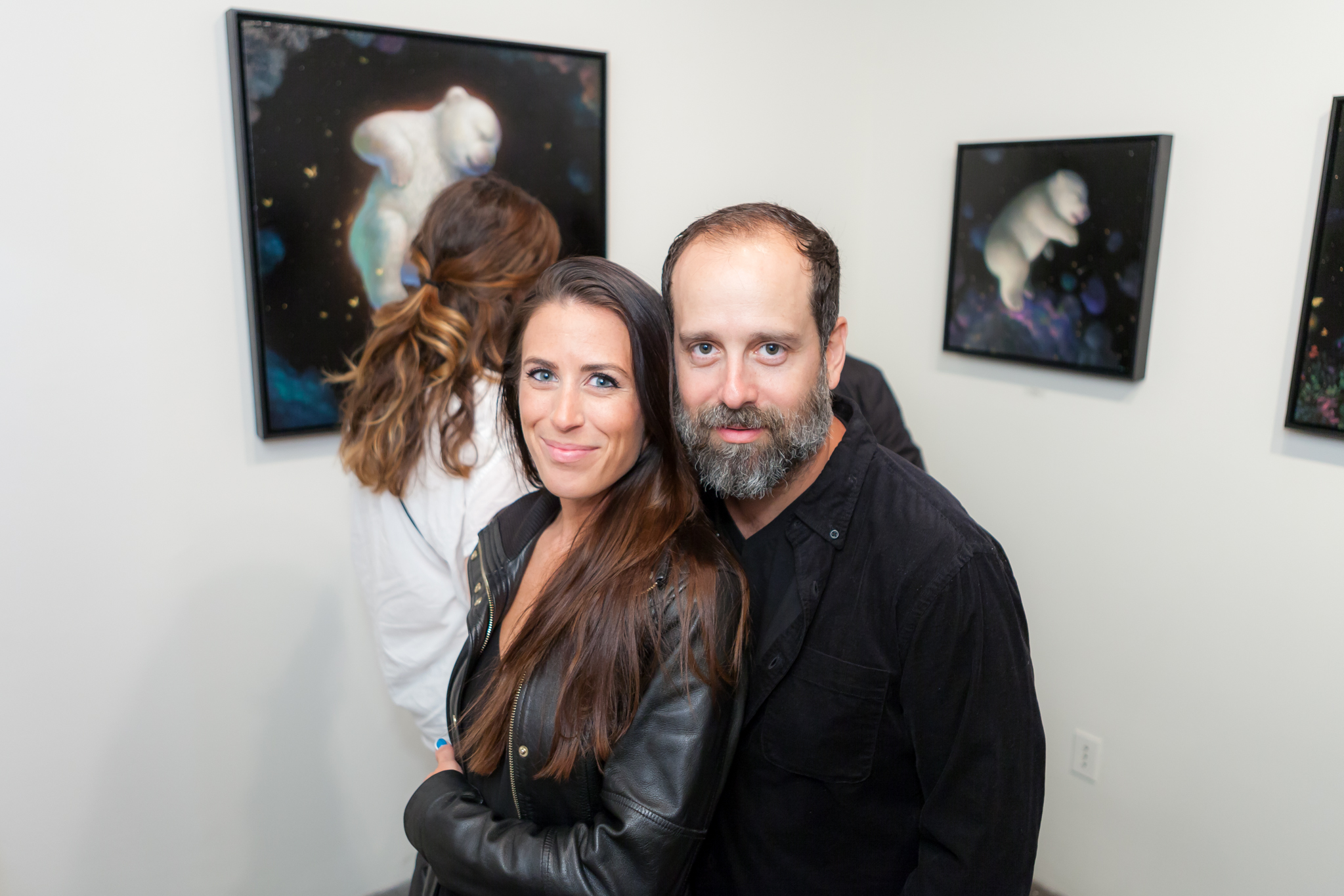 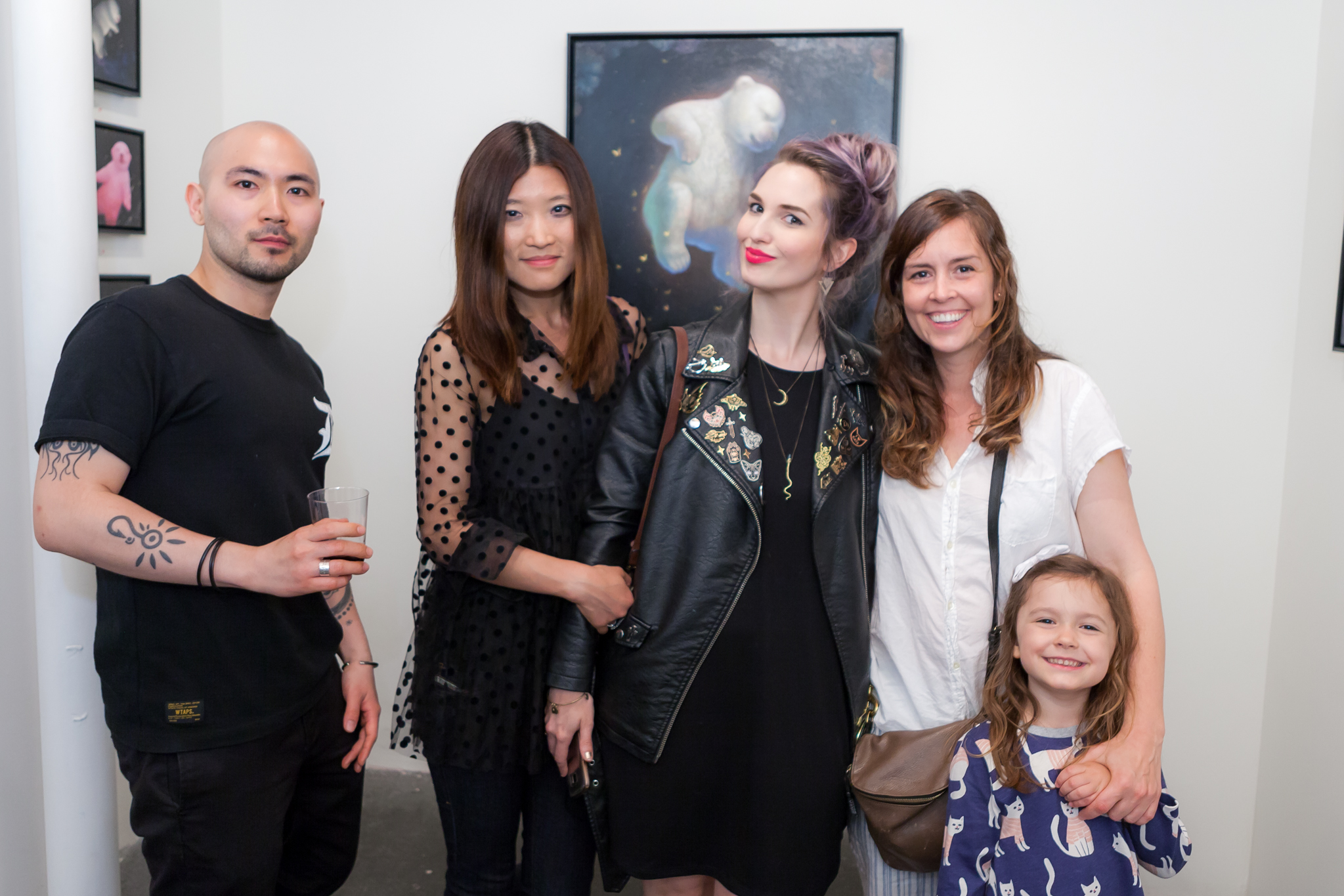 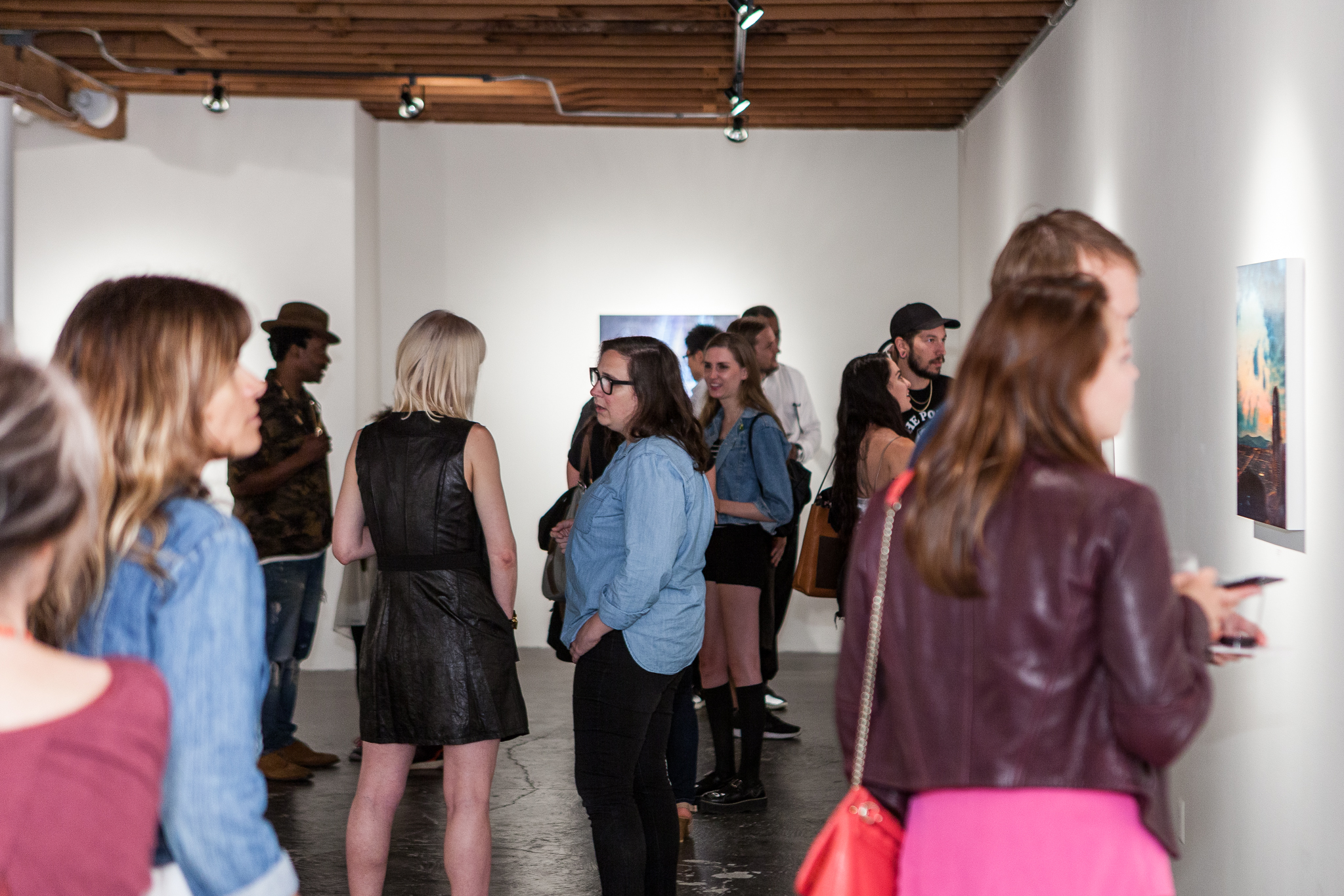 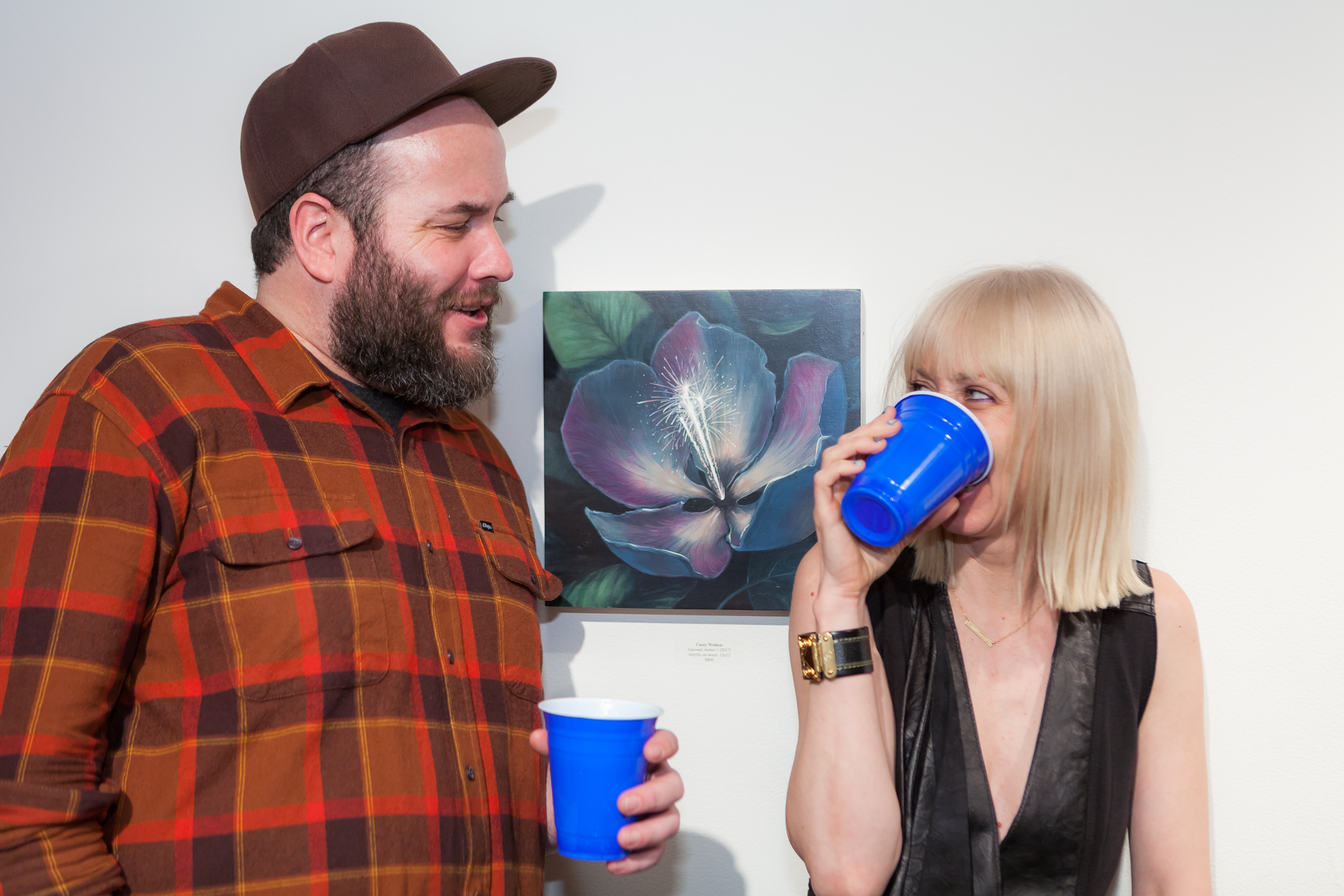