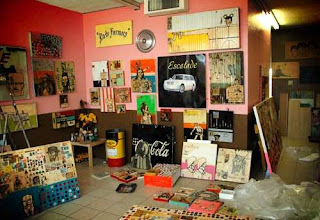 KMNDZ recently made the trip out to the other side of the moon, aka Indio, to visit the studio of The Date Farmers. He posted a nice recap of the adventure on his newly overhauled site here.

The Date Farmers are some of our favorites, and we’ve a number of works from them in our collection. We can’t talk highly enough of their unique mix of colors, letterforms, found objects, and collage and how they fuse so effortlessly and harmoniously side by side in their art. Check out more of their work on Johnny’s site and watch for a show from the Farmers at the Shooting Gallery with Albert Reyes soon.
Look for more from KMNDZ in the upcoming ‘Draw’ exhibit opening up in SF at Shooting Gallery this month as well as a special show out at the Date Farmers’ studio later this month… I hope to be making the trek out for that with the man himself. I have to see the goodness first hand, as the pictures look simply amazing. Love me some Date Farmers!
Be sure to keep on eye on Johnny’s new blog based site as he’ll be doing some more studio visits soon with artists he collects and admires.
http://www.kmndz.com/ 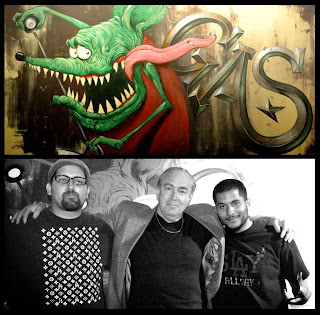 KMNDZ did the logo and painted up the show room of GAS a couple years ago (aka Galpin Auto Sports in the San Fernando Valley where the show ‘Pimp My Ride’ is filmed)… this association led the Galpin family to invite Johnny to come on out and paint a mural during an event they had this past weekend. Johnny brought along Ekundayo and together the pair unleashed the above sick tribute to Rat Fink (measuring 8′ x 4′).

The event was a wild night that saw the boys hanging out and getting advice from Robert Williams (pictured above with the duo), Camp Freddy rockin’ the stage with Ozzy on vocals as they painted, and a bunch of very expensive cars on display including the debut of a couple new cars from car customizer to the stars George Barris.

Red Forest is up through Halloween… don’t miss your chance to view this amazing exhibit in person! 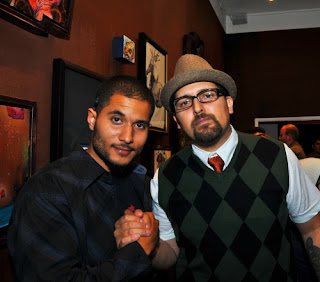 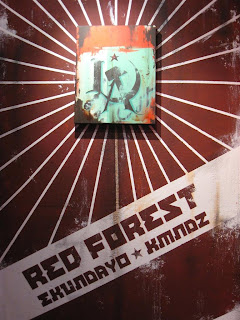 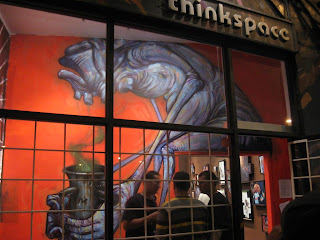 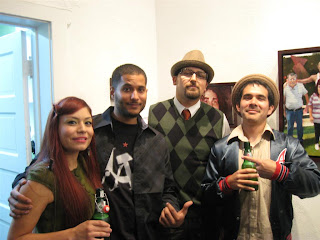 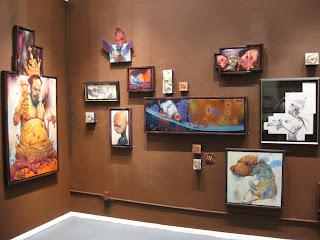 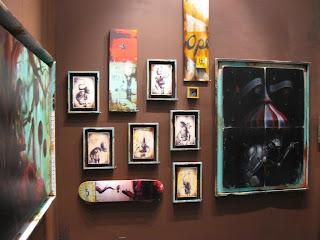 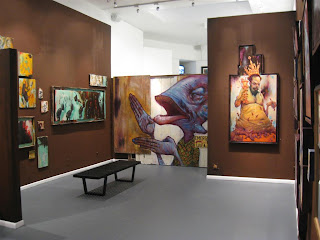 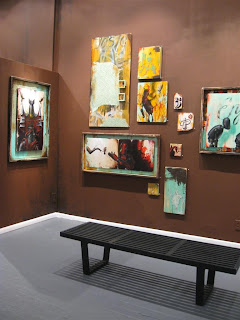 By 7:30PM we were packed and it never let up till way past midnight. What a night! Huge props to Ekundayo and KMNDZ for delivering what many in attendance claimed to be “the show of the year”, from gallery owners to collectors to regular patrons alike, all were praising the show throughout the eve. We’re honored to be hosting this show, but all the praise most definitly should be geared towards the artists as they poured their hearts into this show and it shows. 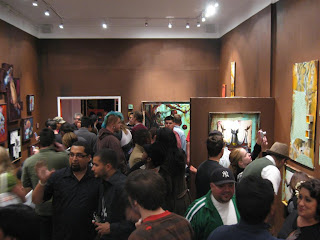 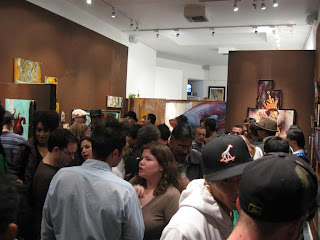 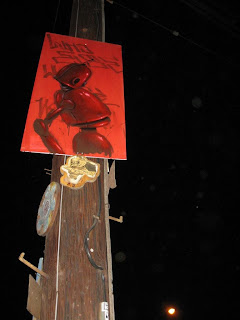 Watch for more news to be posted over the coming month… 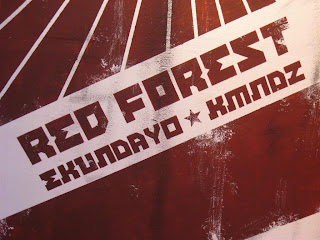 KMNDZ and Ekundayo have been living at the gallery pretty much since Sunday afternoon and are down there pulling an all-nighter again tonight. Transforming the gallery from the ground up, so much going on… below is a candid shot of Johnny and Jeaneen both putting the finishing touches on a piece from earlier this evening… 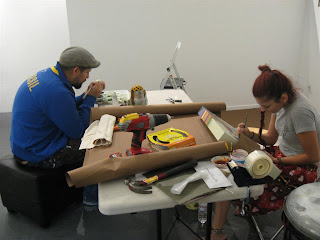 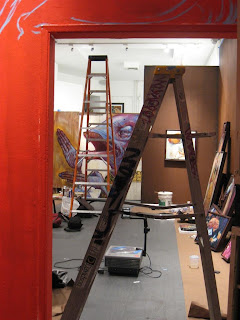 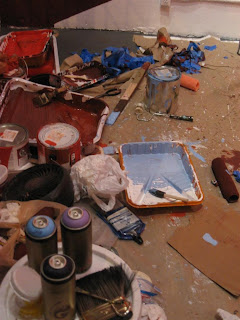 Meanwhile, upfront in the entry area, Ekundayo is busy laying down the foundation for what will be an absolutely awe inspiring mural to great our patrons as they enter the gallery… 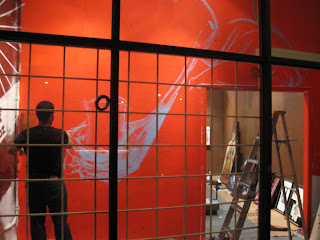 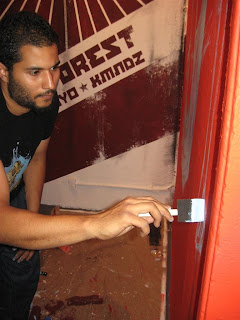 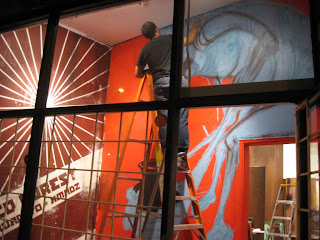 So much still to come… they are sleeping at the gallery, just going off on the place.
Flavorpill.net have named it the art event of this Friday in LA…
“Hot off the success of their individual Thinkspace exhibitions, Ekundayo and Johnny “KMNDZ” Rodriguez join forces for their first-ever collaborative collection at their favorite Silver Lake gallery. Named for the “most radioactive place on Earth,” Ekundayo and Rodriguez’s Red Forest features paintings that focus on man and his many vices, comparing the effects of nuclear power plants to the effects of drugs, alcohol, and general debauchery.” – Ashley Tibbits (FLAVORPILL.NET)
Look for add’l sneak peeks to be posted tomorrow on:
http://www.vinylpulse.com/
http://www.arrestedmotion.com/
http://www.dailydujour.com/
Don’t miss this show. I can’t say much more than that.