Sunday was the opening of the group exhibition “MOVEMENT” for Pow! Wow! Long Beach. Thank you to all those who made it out, and those who were unable to swing by, you can still catch the show now through Saturday, July 27.

“MOVEMENT” features work from 40 different artists with a site-specific mural from CRASH alongside installations from Spenser Little and Balloonski.

Check out www.powwowlongbeach.com for all the special events this week and a full list of this year’s participating mural artists.

“MOVEMENT” made possible thanks to support from HEX and BEVEL. 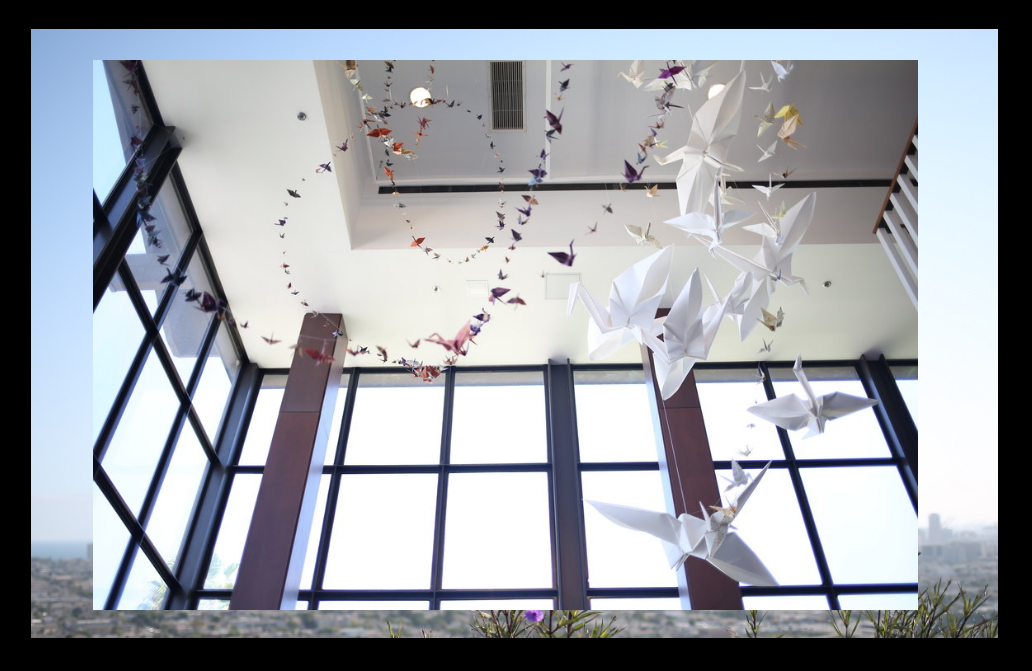 Rise Long Beach kicked off their Artober covering “Vitality & Verve: In The Third Dimension” that is currently on view at the Long Beach Museum of Art. They’ve written great description about each artist and their work in the exhibition. Check out Rise Long Beach’s coverage of the show here.

Ariel grew up atheist so she uses the crane as a way to pray, and make wishes. She loves being able to participate in prayer using the crane gives her the ability to meditate, and focus on a hope, wish, goal or dream without having to know who she’s directing them to. – Rise Long Beach regarding above image.

“Vitality & Verve: In The Third Dimension” currently on view until October 16th.

The following is pulled from POW! WOW!’s blog discussing Pow! Wow! Long Beach. The Long Beach Museum of Art is already starting to be transformed by the installation artist, and you can get a peak of it on Thinkspace Gallery’s snapchat, username: thinkspace_art. We hope you’re just as excited for this year’s Pow! Wow! Long Beach as we are!

All photos by Brian Addison.

Tristan Eaton painting his mural on the Varden Hotel.

Pow! Wow! Long Beach returns this year with a new assortment of artists to paint the walls of Long Beach in the name of spectacular, free art that is accessible by the public and ephemeral in the hands of time.

Six years ago in the warehouse-filled Kaka’ako district of Honolulu, a young Jasper Wong saw an incredible opportunity to create a spectacle that harkened more to the power of humans rather than the excessiveness of human partying.

Coachella he was not seeking. EDC? Absolutely not. He was creating what would soon become a phenomenon that the art world could not ignore. This is Pow! Wow!—and last year, the famed art collective made its first stamp on Long Beach.

Eschewing hipster antics—those popularity-contest-driven events where the partying is slowly eclipsing the art—Wong wanted to bring together his beyond cool friends as “an excuse to make an area better with art.”

We are talking talented street artists that are beyond respected in their own right, from James Jean to Ekundayo, Wu Yue to Will Barras. The result of his “excuse”? Massive mural after mural that has now created a public, outdoor collection of the some of the world’s finest street art, with some walls oftentimes altering year after year. Last year’s Pow! Wow! in Hawaii? It brought over 100 artists the U.K., Germany, Egypt, Israel, Mexico, Lithuania, and the States.

And last year’s event in Long Beach? It turned, in the words of some, DTLB into one of SoCal’s finest outdoor museums, etching names James Jean, Tristan Eaton, Nychos, Cryptic, Fafi, Low Bros, Jeff Soto and more to the streets of Long Beach. On walls. For the public to explore.

Assistants help create Fafi’s piece on 4th between Elm and Linden; it has since been removed and is stored at interTrend Communications.

“Every year, every time, we tell ourselves that we are gonna scale it a bit back—y’know, it’s not easy managing all these artists taking on all these massive walls“ Wong said. “But each year we grew substantially—including to other cities [such as Taiwan, Singapore, and D.C.] has become a different kind of beast altogether.”

The ultimate point of Pow! Wow! is simple: create a global artist collective that seeks to alter the public landscape by providing the world’s leading street artists the largest canvases possible—the walls of buildings—while bringing together creative spirits in a way that is otherwise not possible. It has additionally brought forward musicians, photographers, and videographers to bring their own artistic flair to the event as it has expanded over the years.

This year’s dais includes a plethora of the world’s finest street, graphic, and traditional artists (including Long Beach’s own Yoskay Yamamoto and David Van Patten as well as Long Beach-connected Andrew Hem) and, more impressively, a wonderful array of women and duos.

Aaron Li-Hill: This Toronto native was raised in California but lives in New York and has ancestry in China—making his art one that is culturally captivating and wonderfully hypnotic. Li-Hill has an obsessed with “arresting motion,” where birds are halted mid-flight and creatures stare directly into your eyes.

Brendan Monroe: Monroe hails from Oakland and he isn’t just a painter… Sculptor, illustrator, and husband, Monroe’s interpretations of the world are rooted in science then executed through painting and sculpting.

Andrew Hem: The child of Cambodian immigrants, Hem is no stranger to Long Beach—or the horrors that his parents experienced under the Khmer Rouge. His works are somber, their temperatures cool—as if Hem’s environments are perpetually viewed through a blue lens—and incredibly engaging.

Cinta Vidal Agulló: Based in Barcelona, her work plays with geometry and architecture in a way reminiscent of M.C. Escher but with a colorful and playful quality that makes her definitively unique.

Edwin Ushiro: This Maui-born, California-raised artist attended the Art Center College of Design and attained a BFA in Illustration. His work, almost always revolving around hypnotic female figures, bounces between graphic-like design and the images of Hawaiian charm and color.

Ernest Zacharevic: Zacharevic is that artist where medium comes into question, where his work provokes not just philosophical questions about the state of the world but basic art questions like, “Is that a painting or a sculpture?” Whether its a barrel of monkeys (with a physical barrel embedded into the wall of the mural) or two children racing in shopping carts (where, once again, physical shopping carts are embedded into the wall), Zacharevic is as humorous as he is challenging.

Felipe Pantone: Straddling the line between graphical and hand-drawn, typography and graffiti, Felipe’s work “draws on our concerns of the digital age and the speed at which technology is developing, like looking several light years ahead into the future and discovering a new language in which to communicate.”

Gail Werner: Werner’s work reflects the landscape and cultural imagery related to her Native American background. Her tribal affiliation is with the Cupeño, Luiseño, and Kumeyaay tribes located in southern California. Many of the elements found in her work such as color, light, and plant and animal life are influenced by the southern California desert and mountain landscape.

Hula: This Hawaii-grown artist is now based in New York. Self-taught, he travels the world creating paintings which capture the emotions and interactions between the figures and their environment. With each piece, Hula merges his backgrounds in both street and fine art.

Jaime Molina: Molina is an artist based in Denver, Colorado. He makes mixed-media paintings, sculptures and murals that often display a folk art influence. This artist is a multi-talented professional whose aesthetic is well-defined and evokes a ruminative yet dynamic atmosphere.

Kaplan Bunce: Artist, wood-maker and the 2015 President of the Kaua’i Powwow Council in Kauai. Boom.

KASHINK: Following in the footsteps of Fafi, the other French street artist who appeared in last year’s event in Long Beach, KASHINK paints huge four eyed characters (all male, usually hairy’n’fat), with thick lines, vivid colors, in a very distinctive style–all while wearing a fake mustache.

OG Slick: Slick is one of the most respected street artists on the West, from the streets of Honolulu to Los Angeles since the mid 1980s. And we’re not just talking graffiti; we’re talking murals, sneaker design, typography, video games…

OG23: Combining nearly a decades worth of painting experience, Melbourne artist OG23, is finally dipping his paint covered feet into the professional art world. Fusing precise visual connections, a multifaceted colour palette and design heavy aesthetics, OG23’s work welds an array of influences to produce a body of work, completely of his own.

Pantónio: Hailing from the Azores Islands of Portugal, he describes his work as “the intuitive drawing movement and fluidity between elements.” Animals, interweaving elements, and high contrasts define his aesthetic.

Sarah Joncas: This Canadian artist has garnered a name for herself by skipping animation (where she started) and joining the forces of the fine arts, creating images that harness the power of femininity and street smarts.

Sket One: Sket is no stranger to Long Beach; you can find murals of his in both the East Village in DTLB and on the front-facing wall of Fine Feathers Kombucha Co. along Long Beach Blvd. at 23rd. Playful, clean, and distinct, his obsessed with toys and fantasies always comes to life in his murals.

Telmo Miel: Netherlanders Telmo Pieper and Miel Krutzmann are the duo behind Telmo Miel, both of whom create realistic, giant murals with nothing but spray paint. Whether its blow-up pink flamingos or beautiful children, Telmo Miel’s mass-scale murals are captivating.

Yoskay Yamamoto: This Japanese-turned-Long Beach native ventured to the US at the age of 15, teaching himself the art of illustration while falling for the urban life of the West Coast. Call his work Japanese American urban pop art.

All photos and copy are ©2016 Downtown Long Beach Associates unless otherwise stated. For inquiries regarding use of photos or copy, email info@dlba.org

Documenting the adventures of Nychos as he traverses the world and painting every corner of it. Within the last two years Nychos was accompanied by filmmaker Christian Fischer who recorded his journeys to create a full length film. “The Deepest Depths Of The Burrow” is a documentary about art, lifestyle and subculture. The movie captures the experiences of Nychos and other members of the RABBIT EYE MOVEMENT within the last several years. Exceeding the Austrian scene, they flew from Berlin to San Francisco to Copenhagen to Hawaii and many more places to visit artists who all provide a unique view into their (street) culture. They lead Nychos through the streets of their home cities and show them the deepest depths of their burrows. ”Travel to paint, paint to travel” is the motto, which runs like a golden thread throughout the entire movie.

After the screening of “The Deepest Depths of the Burrow”, we will host a special 1-2-1 talk between Jeff Staple and Nychos.

As of this very moment tickets are still available, so get them now before you miss out!

For more information, go to the following websites:

Honored to once again be partnering up with the fine folks of POW! WOW! for the inaugural edition of POW! WOW! Long Beach taking place between June 22nd and June 27th.