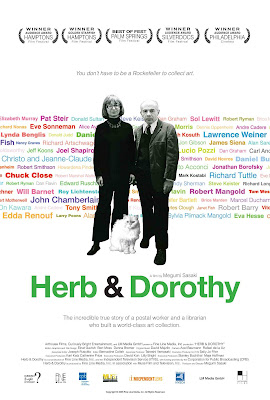 Arthouse Films present ‘Herb and Dorothy’, a new award winning documentary that will debut in Los Angeles, on Friday, July 10 at the Landmark Nuart on Santa Monica Boulevard. For those of you out in the OC, there’s a special screening tomorrow night at the Orange County Museum of Art (OCMA).

The film tells the extraordinary story of Herbert Vogel, a postal worker, and Dorothy Vogel, a librarian, who managed to build one of the most important contemporary art collections in history with very modest means. They lived off of Dorothy’s salary and used Herb’s to collect art. They only had two requirements when purchasing art: the piece had to be affordable, and it had to be small enough to fit in their one-bedroom Manhattan apartment. Over the decades they collected over 2,000 pieces of art, (keeping all of it in their tiny apartment) and became patrons of artists like Sol LeWitt, Christo and Jeanne-Claude, Richard Tuttle, Chuck Close, Robert and Sylvia Mangold, Lynda Benglis, Pat Steir, Robert Barry, Lucio Pozzi, and Lawrence Weiner.

You can also find out more about the film at the film’s site: http://www.herbanddorothy.com/

More details on the July 10th premiere will be posted here soon.