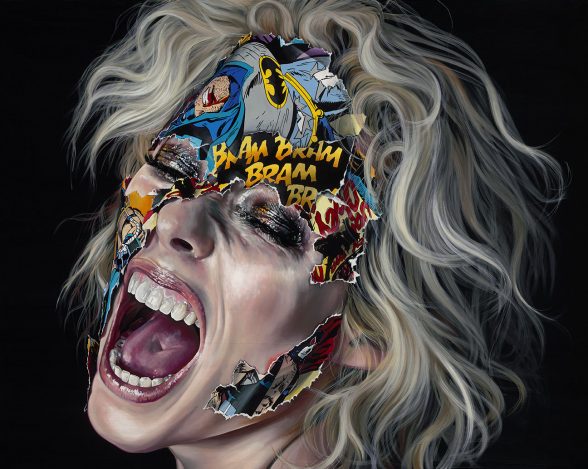 Sandra Chevrier | Cages and the Allure of Freedom
The Montréal-based Canadian artist creates work that explores identity as a locus of competing imperatives and complex contradictions. Drawing parallels between the assumed invulnerability of the superhero and the impossible demands placed upon the contemporary individual, Chevrier creates literal and metaphoric masks by combining comic book imagery assembled from found and imagined sources. Her dystopian spin on the iconic figure of the superhero looks to reveal the flaws in the staged extroversion of the superficial veneer.

In Cages and the Allure of Freedom, her first significant solo museum presentation, Chevrier will be showcasing large-scale sculptural works for the first time including three massive portrait based reliefs alongside three life-sized, hand-painted busts complementing some of her largest two-dimensional acrylic on canvas works.

Seth Armstrong | Lil’ Baja’s Last Ride
Los Angeles-based painter Seth Armstrong creates paintings that arrest a sense of time. Some offer expansive views and others a contracted intimacy, moving freely in and out of public and private spaces to create intersecting narratives. Known for paintings that self-consciously capture the act of looking – whether as a voyeur in trespass or a participant in the landscape – Armstrong apprehends the simultaneity of the city as a place of endless, contingent narratives, jarring interruptions, and suspenseful pauses.

In Lil’ Baja’s Last Ride, the artist presents a sequential vignette of over ten new paintings in which his own car becomes an unlikely protagonist. His immersive approach to his subject matter often produces anecdotal adjuncts. Following several pilgrimages into the landscape between his home in LA and Lancaster for the exhibition, a route, incidentally, which also happens to have personal childhood significance for the artist, Armstrong’s beloved beater and proverbial instrument of research, ‘Lil’ Baja,’ caught fire and was partially incinerated in the museum’s parking lot. The overarching narrative structure of the works feels ambiguously suspended somewhere between fiction, social realism, and personal history. In an ending befitting Armstrong’s own penchant for cinematic turns, poetic hooks, and absurd knacks, Lil’ Baja’s Last Ride is an unexpected swan song in memoriam to an old friend’s final expedition.