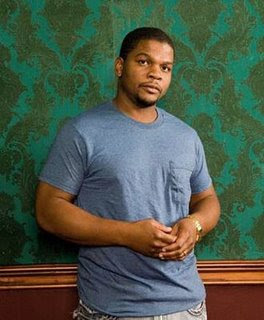 We’ve been looking forward to this one for a while. We first posted on this a month back, but wanted to post a reminder, along with a lil’ more info on the show that opens this Saturday / ‘The World Stage’ series as a whole. Not to mention some info on Wiley’s signing this Thur at The Getty Museum and a nice video shot around ‘The World Stage: Africa’ for a lil’ further insight to this incredible talent.
Roberts & Tilton is pleased to announce ‘The World Stage: Brazil’, the latest offering of Kehinde Wiley’s ambitious ‘World Stage’ series. Through Wiley’s extensive investigative exchange, the artist’s contemporary yet historical oeuvre accentuates international cultures and their denizens, evoking discourse on an ever-expanding examination of globalization.
During Wiley’s residency in Rio de Janeiro, Afro-Brazilian men became the impetus for the majestic paintings, inspired by the iconic nationalistic sculptures that line the city streets and anchor its parks. Statesmen, noblemen, and the elite of Brazil are erased from their perches; the young black and brown men from present-day favelas are aggrandized. In tandem with the homoerotic undertone, Wiley further challenges the realm of the conventional male gaze. The viewer is forced to confront notions of the inherent colonial influence, exoticism and festishization. 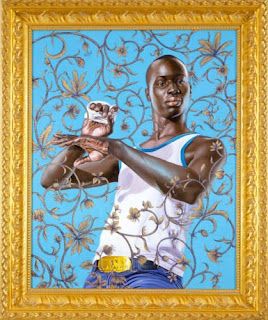 Though weaving in the history of Western portraiture, the Brazilian essence radiates from Wiley’s new body of work. Oversized, tropical flowers bursting in bloom, appropriated from brightly hued indigenous textiles, encompass the spirit and culture of Brazil. Set against a storied backdrop of Brazilian iconography, the male subjects pose in their own clothing, reflecting a reverence for American conspicuous consumption. Past segments of ‘The World Stage’ include Africa (image from that series above) and China. This is Wiley’s third solo exhibition with Roberts & Tilton. Previously, Wiley has had solo museum exhibitions at The Brooklyn Museum of Art (Brooklyn, New York), the Columbus Museum of Art (Columbus, Ohio) the Portland Art Museum (Portland, Oregon) and most recently The Studio Museum in Harlem (New York, New York). He has also been included in exhibitions at the Hammer Museum, (Los Angeles, California), the Rubell Family Collection, (Miami, Florida), the National Portrait Gallery (Washington, D.C.), and the Whitney Museum (New York, New York).

Kehinde Wiley on His Art and Its Influences
Date: Thursday, April 2, 2009Time: 7:00 p.m.
Location: Getty Center, Harold M. Williams Auditorium
Admission: Free; reservations required. Call (310) 440-7300
Please note: due to high demand, people without reservations or those arriving later than 15 minutes prior to the start of the program may be seated in a second auditorium to view the program on video simulcast.
The Getty Center is located at 1200 Getty Center Drive in Los Angeles – approximately 12 miles northwest of downtown Los Angeles. See Hours, Directions, Parking for maps and driving directions.
Below is a great video on ‘The World Stage: Africa’ collection and how it came together, please take a moment to check it out.