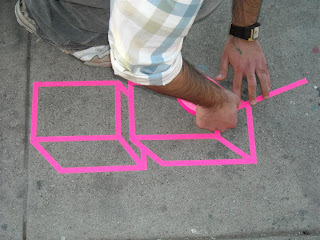 Aakash Nihalani getting busy out front of Thinkspace yesterday…
THE NEO-CON COLLECTIVE consisting of Aakash Nihalani, Ellis Gallagher, and Poster Boy have invaded Los Angeles. The infamous NYC street artists have made an impromptu landing in West Hollywood this week for their first West Coast exhibition, opening Thursday, April 9th, 2009 from 7.00pm – 10.00pm at Carmichael Gallery of Contemporary Art. If that’s not enough to get ya’ off the couch, the Neo-Con Collective will be joined by UK graffiti god Zeus (+ Boxi in the front gallery – more on that below). Prints, photographs, and mixed media artwork will be available for purchase and the four artists have collaborated on elaborate installations throughout the gallery. Aakash Nihalani, Ellis Gallagher and Zeus will be in attendance on the show’s opening night. Poster Boy, however will not. Probably a wise move on his part given the current heat in NYC around his street work. 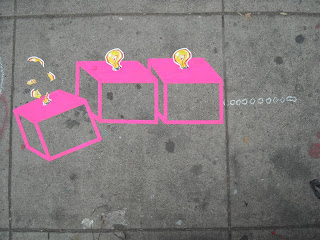 The completed collaboration between the three… boxes by Aakash Nihalani, Thinkspace bulb sticker deconstruction courtesy of Poster Boy and the lil’ trail of bubbles from Ellis G. Watching Poster Boy do his thing with our bulb stickers was a pretty awesome moment. 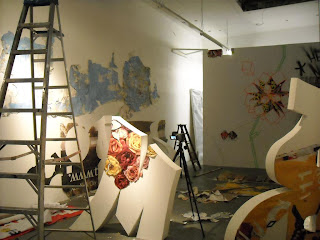 After hanging out upon landing and doing their thing out front our gallery, the gang invited me by to check things out over at Carmichael. Ellis is the man, and after flying him out for our big Brooklyn show earlier this year, I just had to make some time to hang with him again. I didn’t have the chance last night, but I had the chance to get out there earlier this eve. They’ve gotten so much more done since AM and Daily D posted sneak peeks today, that I’m glad I waited an extra day to swing through… they are just KILLING it. 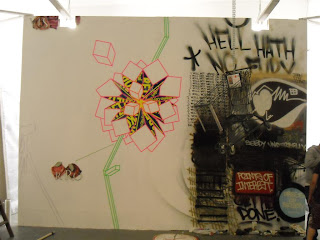 Above is the main collaborative wall from the Neo-Cons… the tape flower from Aakash and Poster Boy is just amazing and the flame tag area from Ellis G. is so next level insane – so many layers and texture – you have to check this out in person.. and Ellis was still going to down on this when I left (see video below)… gotta love the Ralphs’ cart hanging from the ceiling. 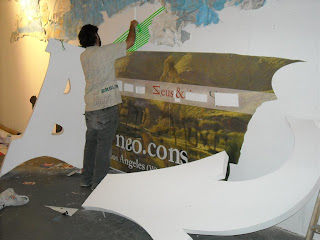 Aakash Nihalani’s street work consists mainly of isometric rectangles and squares (seen above doing his thing). He selectively places these graphics around New York to highlight the unexpected contours and elegant geometry of the city itself. All execution of a piece is done on site with little to no planning. “We all need the opportunity to see the city more playfully,” he says, “as a world dominated by the interplay of very basic color and shape. I try to create a new space within the existing space of our everyday world for people to enter freely, and unexpectedly ‘disconnect’ from their reality. People need to understand that how it is isn’t how it has to be. My work is created in reaction to what we readily encounter in our lives, sidewalks and doorways, buildings and bricks. I’m just connecting the dots differently to make my own picture.” 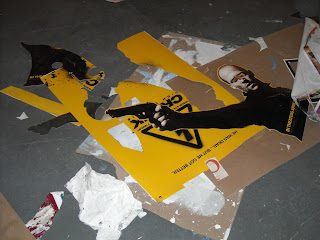 Remnants of Poster Boy at work… 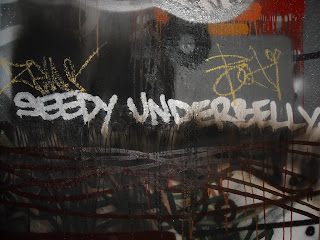 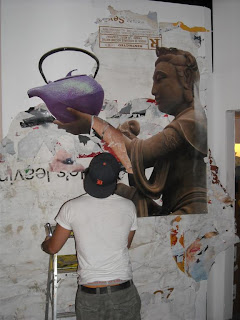 Poster Boy (hard at work on his install above) is an anonymous New York City-based street artist whose only utensil is a razor. He is known for satiric collage-like works created by cutting out sections of the self-adhesive advertisement posters in the platforms of New York City subway stations and pasting them back in different positions. 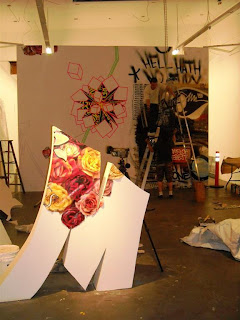 Close up of one of Zeus‘ epic 3-D graff letters… for this install, he’s spelled out BOMB to great efffect… he’s been at it for over a week and it shows… 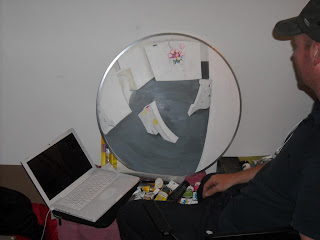 For the past 20 years, London artist Zeus (shown above painting his mirror image piece for the show) has been drawing inspiration from urban culture to create dynamic, experimental compositions that have re-defined graffiti art. Captivated by the hip-hop scene of the 80’s, he began expressing his creative talents on the street when he was just 14, using walls, trains and open spaces as his galleries. Since then Zeus has continually pushed the boundaries of graffiti artistry, taking the form out of its traditional setting and into new, exciting and more legitimate places. His latest work represents an innovative fusion of graffiti techniques and typography, fine art and sculpture and reflects both his background on the streets and his formal training at Chelsea College of Art.

Ellis Gallagher’s shadow chalk drawings, executed in both urban and interior settings, seek to enhance the beauty of everyday objects and mundane situations that are routinely overlooked. Chalk drawings of bicycles, milk crates, fire hydrants, parking meters and shopping carts inspire curiosity and encourage the viewer to pause, observe, initiate conversation and experience their surroundings with a renewed sense of optimism. 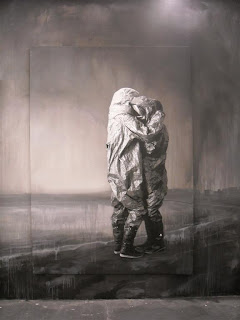 On top of all that, up front Grey Area, the first US solo exhibition of work by UK artist Boxi, is coming together and he’s getting ready to blow some minds with his photo realistic stencil works. Six layers of goodness make these beauties up… think Logan Hicks doing portraits and that will give you an idea of the detail in each piece. They are all hand cut, and just stunning in person. The piece above, part of the main install wall, is easily 5×10 feet – one of three canvases that large in the show. 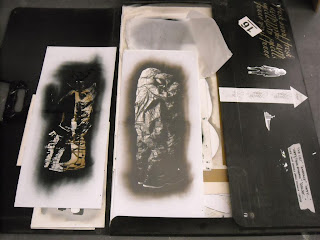 “I am drawn to the incongruous narrative in figuration. My works aspire to polarize the stability of what is at first perceived to be harmless or sweet but in reality turns out to be pathetically desperate or tragic or vice versa. A dark disillusioned romanticism pervades throughout…(along with) confrontational themes, such as paranoia, disappointment, expectation, grief, mistrust and other upbeat reflections of our times. It is in this state of reflection, this ‘grey area’ of ambiguity and blurred truth that I have found myself in, a place where trends and crashes in the market aggressively threaten and pressurize social behavior. Making life-sized figures that articulate this uncertainty is a way for me to come to terms with the phrase ‘of our time’.” – Boxi 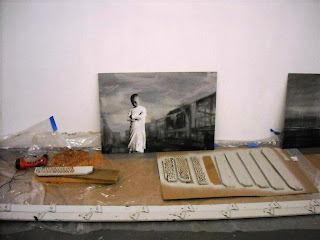 Very curious to see how this one plays out… Boxi has deconstructed an old ladder, and is drilling holes in it, to the point that it will be barely able to hold itself together… no doubt a statement on the fragile times we are all living in currently. This should be killer to check out on Thurs… 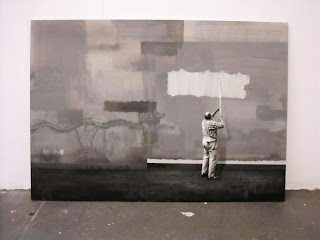 Born 1974 in Kent, England, Boxi completed his studies at the London St. Martins School of Art with a BA Fine Arts degree in Painting in 1996. He has lived and worked in Berlin, Germany since 1999, joining REINKING PROJEKTE in 2007. 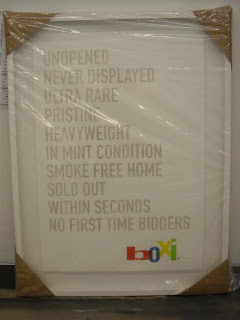 Simply genius. What a great piece.