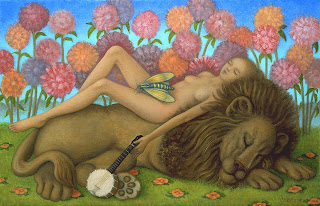 Your last chance to view the exhibitions from Amy Crehore and Anthony Clarkson are this Thursday and Friday at Thinkspace… then we’ll be taking ’em down and getting ready for the March exhibitions with Matthew Feyld and David MacDowell. 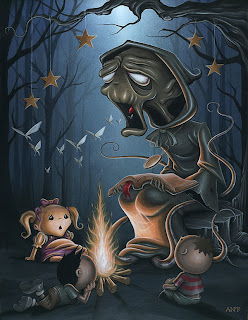 ‘Dreamgirls and Ukes’ and ‘The Silent Treatment’ are on view through this Fri, March 6th – don’t miss the final two days to catch both exhibits.

View the works from ‘The Silent Treament’ here.

I’ll be posting the ‘recommended openings’ for this weekend early Thursday AM. So many killer shows this weekend. Things kick off Thursday night with the big Hush and Flip shows at Carmichael and don’t let up from there. Really looking forward to the return of the Kitschen Sync group show at LaLuz on Friday too. We really are spoiled living out in Southern California when it comes to the arts. 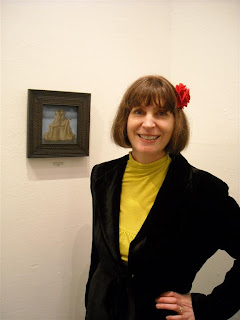 The opening night for Amy Crehore‘s (pictured above) ‘Dreamgirls & Ukes’ and Anthony Clarkson‘s (pictured below) ‘The Silent Treatment’ went off in style. Thank you to all that braved the crappy weather to come out and enjoy the show… 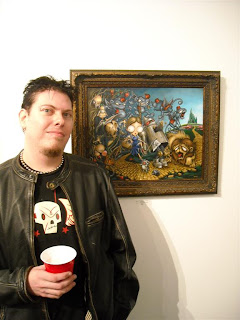 Those that showed up around 9PM were treated to a very special performance from Amy’s band ‘The Hokum Scorchers’ (see below). The Scorchers treated all in attendance to almost a full hour of blues, rags and jug band songs from the 20’s and 30’s. A big thank you to Amy and her husband Lou for providing a very memorable night that many were still talking about the next night at the ‘Movers & Shakers’ opening (see overview on that show below)… 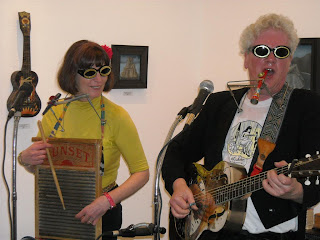 We captured a few songs from ‘The Hokum Scorchers’ on video to share with you all. Below is one and others are viewable on our YouTube page here.

View the works from ‘The Silent Treatment’ here. 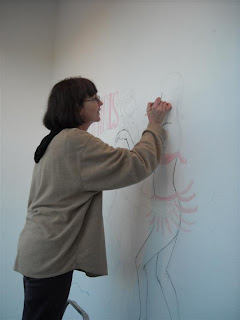 Amy Crehore arrived into town from Oregon late Sunday afternoon and hit the ground running on Monday, waisting no time in getting started on her front entry area wall mural… 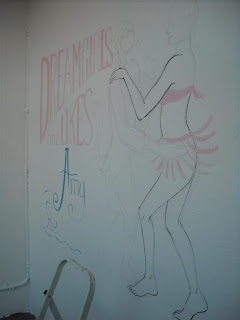 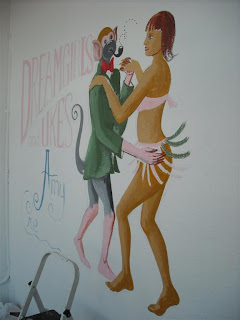 Coming along nicely… be sure to come by opening night to check out the finished product. 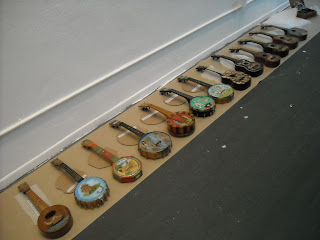 Amy’s ukulele arsenal laid out, and ready for installation… 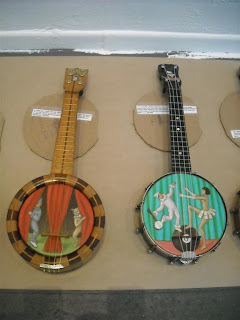 The ukes are just amazing. All have been lovingly restored by her husband, who’s a professional luthier, and are ready to play. Beautiful antiques taken to another level by Amy’s talented hand. 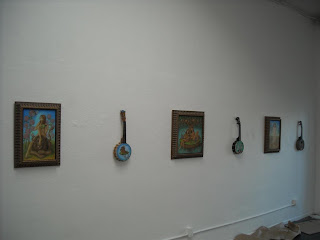 The installation of things is coming along… going to be a very nice flow of works, can’t wait for all to enjoy this one, really a fun show. 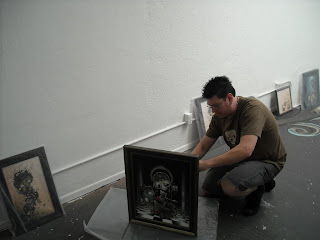 Anthony Clarkson arrived today and is starting in on his wall mural and getting all his paintings ready for installation… the gallery is abuzz with activity.
Opening this Fri, Feb. 13th 7-11PM @ Thinkspace
Amy Crehore‘s Dreamgirls & Ukes
+ Anthony Clarkson‘s The Silent Treatment
4210 Santa Monica Blvd (near Sunset Junction) in Los Angeles 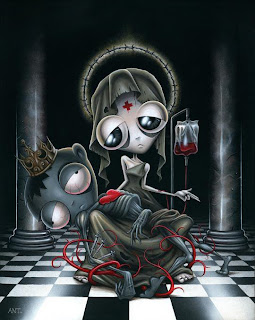 An interview with Anthony Clarkson
The art of Anthony Clarkson is a portal into child-like innocence, mixed with troubled spirits, broken hearts and a sense of emptiness. When Clarkson graduated from the Colorado Institute of Art in 2002, he was resolute in his decision to make a living as a graphic artist in the music industry. He was hired as the head graphic designer for a prominent record label in Los Angeles shortly thereafter. Embracing a vibrantly hyper realistic digital photo-manipulation technique, his first published album cover followed shortly after joining their ranks and quickly established a long list of published album covers for several bands on various labels.

Clarkson’s art has been showcased in several galleries in the United States including Thinkspace, DvA Gallery, Gallery 1988, Cannibal Flower and Copro/Nason. Exhibitions of note include special curated exhibitions that were dedicated to Mattel/Hot Wheels, Marvel Comics (hosted by Stan Lee) and ‘Crazy for Cult 2’ (hosted by Kevin Smith). Clarkson was also featured in the ‘Intersections’ show at the Cypress College that took place during the spring of 2008.

1) Please talk a lil’ bit about the general idea/vibe behind your new series of works for ‘The Silent Treatment’.
The works in this show are more of an overall selection of different themes I do, with future shows I think I’ll work towards more “themed” based pieces around one or two ideas

The title, ‘The Silent Treatment’ has partly to do with the way it sometimes takes silencing the world out before you can hear what you have to say. As far as the advertising and awareness campaign look, it is also a play off the name with my love for the look that old silent movies have. 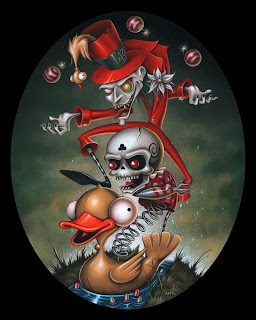 2) Much of your new body of work revolves around lost loves / innocence lost – care to elaborate at all?
For me, and I think most people, love is the one thing that can make you feel bigger than life, and truly euphoric. However it can also make you feel a bottomless pit of despair. In those moments, as gut wrenching as they are, I think you can find out things about yourself and the kind of person you are. In those moments you are forced to really look inside yourself.

As for loss of innocence… I just notice how people as they get older seem to loose a spark to their spirit. It’s easy to say it’s because we have to live life in the “real world”, but I think there is more to it than that. As kids the world is an unending sea of possibilities, but as we get older we feel forced to compromise things, and then we start to except compromises too much to the point we loose that spark and just become hollow drones.

3) What’s your earliest memory involving art or creating art?
I’ve never known life without art. It’s such a part of me I never thought “ok, I’m going to be an artist… this is my thing”. It was just always part of me.

However I do remember I was maybe 6 or 7 and I made “life size” (remember I was 6 or 7) cutouts of all the Masters of the Universe characters and colored them. I then hung them all up in our basement and charged each member of my family 5 cents to come take a tour. I do remember at that point realizing I was a bit different than most kids. hahaha! 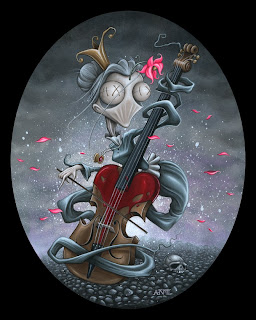 4) When are you most productive / when do you normally work on art?
It really depends on just the mood I’m in. I feel most productive in the mornings, but tend to like to work at night. The night is just soooo much more quiet… and I like the dark, there’s a peace to it.

5) In addition to picking up steam on the gallery circuit, you’ve been approached by a number of toy companies in recent months. I know of the recent Disney custom show – please tell us a lil’ about that and anything else that can be discussed at this point.
The Disney Stitch thing was really cool. I like doing things like that where it’s a special custom piece for a show, or designing something like a Dunny.

As far as with any of my own toys, I’m going to be really picky. I’m very open to hearing ideas companies have for working with me, but I want to make sure they’re done how I would want them and not compromise my vision just to put a toy out there.

6) Do you listen to music while painting/drawing? If so, do you have a current favorite that inspires?
Music is a HUGE part of my life. I either paint with music going or movies that I’ve seen a billion time so I can follow along without watching the screen.

Usually I like to listen to more of an ambient dark soundscape kind of stuff when I paint. I always find myself returning to bands like The Cure, Diary of Dreams, The Sisters Of Mercy, Sigur Ros, Tori Amos, Anathema, Ulver, Switchblade Symphony, The Album Leaf.

If I want something more abrasive I usually listen to something like Iron Maiden, Marilyn Manson, AFI, The Birthday Massacre, Nine Inch Nails, Paradise Lost… stuff like that. 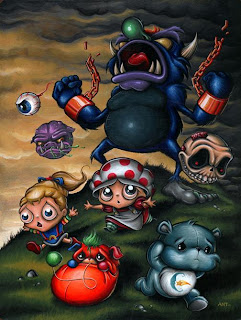 7) If you had to explain your work to a stranger, how would you do so?
I usually just say it’s just dark emotionally driven cartoonish stuff… followed by, “you just have to see it”. haha!!

8) Favorite artist (living or dead) and what makes them special to you?
Michelangelo was my first love of a classic artist, more so his sculptures than his paintings. In fact, his sculpture of the Pieta’ is maybe my favorite piece of art ever and was the inspiration for the main piece used in the awareness campaign for ‘The Silent Treatment’ show called “Together Through Sick and Thin”.

I just love the silent passion of it. So much is said with almost no movement to it. Plus parts of the stone flow like water and that just blows me away.

9) What have you got coming up in terms of shows and projects after “The Silent Treatment”?
I’ll have one or two pieces at the ‘Idiot Box’ show on April 2nd at Gallery 1988 LA, then I have a show up at Gallery 1988 SF along with 9 others later in the month of April Past that, things are still coming together. 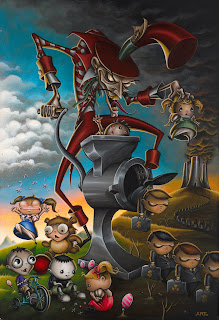 10) You’re releasing your first print in conjunction with this exhibit. Can you tell us a lil’ bit of the back story behind “The Organ Grinder” piece?
It was a commissioned piece, but the buyer gave me total creative control. It was an idea I’ve had for a long time. Maybe one of my more outward social comments as opposed to the more internalized emotional works. But I just wanted to make a pretty blunt comment on the “rolls” that we are suppose to play and how we are put in them and blindly accept it without questioning if that is what we really want for ourselves.