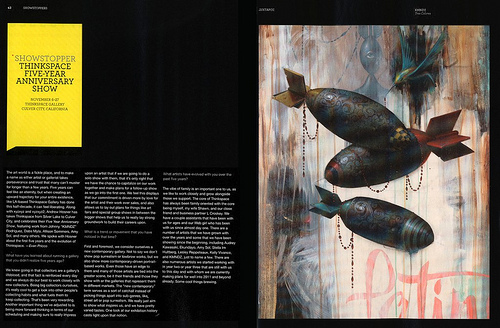 Our big 5 Year Anniversary show just got featured as a ‘Showstopper’ in the new December 2010 / issue #119 of Juxtapoz magazine (James Jean on the cover). The 2-page feature is on stands now and features a full-page devoted to KMNDZ‘s striking ‘Tres Colores’ painting from the show.

“The art world is a fickle place, and to make a name as either an artist or gallerist takes perseverance and trust that many can’t muster for longer than a few years. Five years can feel like an eternity, but when creating an upward trajectory for your entire existence, like LA-based Thinkpsace Gallery has done this half-decade, it can feel liberating.” – Juxtapoz

The issue also features great features on James Jean, 123 Klan, San Rio’s big 50th Anniversary and much more. Be sure to pick up your copy on news stands now.

Check out the works featured in our 5 Year Anniversary show here:
http://www.thinkspacegallery.com/2010/11/works.php