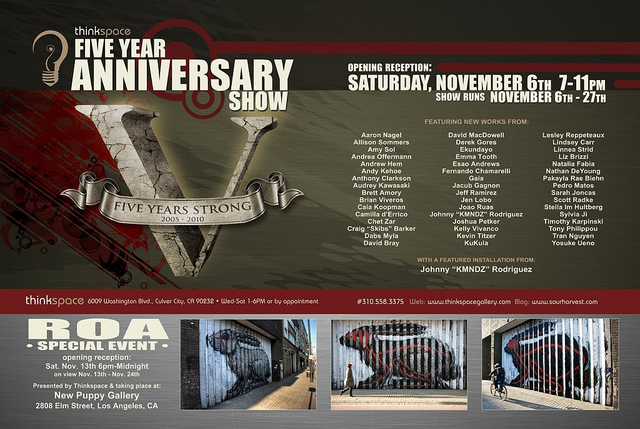 This coming November Thinkspace will be celebrating its 5 Year Anniversary. We’re pretty excited about this and to help celebrate we have put together a group show that aims to focus on the artists that have helped to establish us as a gallery and that will also provide a glimpse at some of the artists we’ll be showcasing in the years ahead.

With a featured installation from: Johnny ‘KMNDZ’ Rodriguez

We’ll be updating the ‘Sneak Peek’ link regularly as we get closer to the show this November. We will also be launching a series of ‘5 Years / 5 Questions’ interviews with all the artists we’ll be featuring in the show. Look for the 1st of those to be posted here in the week ahead.

Just in case that wasn’t enough, we’re not stopping there. We’re also happy to announce that we will be presenting Belgian-born artist ROA‘s debut west coast solo show the following weekend on Sat, Nov. 13th. This will be a special pop-up event presented by Thinkspace and taking place at New Puppy Gallery just outside of downtown Los Angeles. ROA has been extremely busy of late and traveling all over Europe. So far this summer he’s put up amazing pieces at Nuart, Infart, Critica Urbana and just finished up a few pieces in Ancona, Italy as part of Popup! 2010. On top of that he did a special piece in the UK that ended up on the cover of the recent issue of VNA. He’s currently preparing for a major trip to Russia that’s just around the corner. After all that, he’ll jet across the pond and will arrive into Los Angeles in late October… get ready!

Check out a nice set of ROA’s work on the streets courtesy of Unurth here:
http://www.unurth.com/index/filter/Roa

More details will be announced soon…