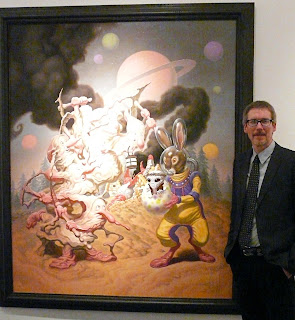 The opening reception for Todd Schorr‘s ‘The World We Live In’ opened this past Saturday at the Merry Karnowsky Gallery and highlighted four major new works, along with color studies and process drawings for each. There was also a number of new prints available on both canvas and paper, along with all of his past prints, which were framed and on view for all to enjoy.
Many of LA’s art world elite came out to pay their support to Schorr including wife and fellow artist Kathy Staico-Schorr as well as Robert Williams, Tara McPherson, Van Arno, Mark Dean Veca, Brandi Milne, Gary Baseman, Tommy Hollenstein, Bob Dob, Gregg Gibbs, Jason Maloney, Ana Bagayan, Luke Chueh, Thomas Han, and many more. Yep… you read that right, there was indeed a Thomas sighting at this show. 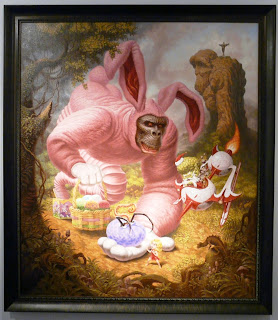 THE massive showstopper – “An Ape Allegory” – $135K and sold!!!
The night was hosted by David Arquette (along with his sister Patricia Arquette) and well known pop surrealism collectors Leonardo DiCaprio and his parents were in attendance as well. There were a number of other ‘stars’ in attendance, but I’d say more ‘B’ level TV types… the ones you recognize, but couldn’t name if you had a gun to your head type.
It was a paparazzi fest to say the least, with many of LA’s brightest out to support. Sadly, I didn’t get in touch prior to the opening to get a ‘press pass’, so I was only able to snap off a couple shots. Honestly didn’t think it would be an issue, considering we’ve been covering Merry’s shows for five years now here on Sour Harvest, but alas, when stars and their fragile egos get involved, all has to be cleared and such in advance. Go figure.
Be sure to check out Arrested Motion for more great coverage and add’l pictures here.
Merry Karnowsky Gallery
170 South La Brea Ave. in Los Angeles / 323.933.4408
“The World We Live In” featuring new works from Todd Schorr
(On view through April 18th)
http://www.mkgallery.com/