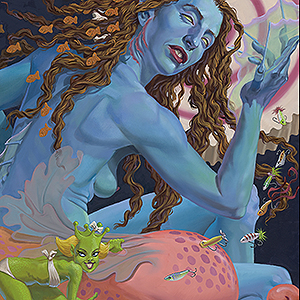 (Los Angeles, CA) – Thinkspace is pleased to present Upright, featuring new works by Los Angeles-based artist Van Arno. An established veteran of the New Contemporary movement, Arno has been exhibiting his dynamic figurative work since the 90s and has regularly been featured on the pages of Juxtapoz magazine, appearing there as early as 1999. Subscribing to the creed that, ‘more is more,’ Arno has always pushed the limits of the body and the narrative, challenging both to the point of rupture and distortion.

Arno has sustained an ambivalent relationship to storytelling for decades, shifting in and out of loose references to mythology, politics, pop culture and art history. These allusions have remained intentionally unfixed throughout his work, as he channels the surreal results of indiscriminate and unexpected recombinations. In Upright, Arno’s focus is re-posited on the individual figure, rather than on multiple interacting protagonists, looking to one body as a caricatural and psychological vessel for story. In a conscious move away from the overarching demands of storytelling, however, Arno returns to the fascination of the localized and the individual without abandoning the theatrics and hyperbole of his signature style.

The artist’s penchant for distortion is at the core of these iconic works. With a refusal to follow anatomical, perspectival, or gravitational laws, his paintings become titillating, dynamic, and lawless things. The surreal emerges everywhere in Arno’s deck, explosively at times even, with an orgiastic irreverence. Some have likened his pictorial style to the extreme and contorted affectations of Mannerism, the Late Renaissance stylizations that emerged in the wake of its exhausted pursuit of verisimilitude. Arno’s past images, by contrast, have been compared to the elaborate staging of history painting or the symbolic tangents of allegorical tableaux, but far from idyllic restraint, they’re cast in the sharp hues of contemporary psychotropic prolapse.

Though this new body of work marks a departure in its focus on the individual figure, the mythological, historical, pop cultural, and iconographic references Arno has long sutured together in his imagery remain. Referencing freely from our shared cultural reserves, the works incorporate everything, from the era of classic Hollywood and the crossing of the Bering Straits, to the violence of ancient Greek mythology and even Blinky the mutant three-eyed fish of Simpson’s fame. By providing the viewer with an entry point into the work, Arno uses the culturally familiar to intensify the impact of his iconoclastic gestures.

Another art historical paradigm Arno continues to engage is that of the female nude. His emphasis on the distortions of bare flesh, however, feel more in service of his unique stylization and thematic excess than on fetishism. Often bordering on the abhorrent or abject, the expressive potential of nakedness in his compositions takes on an intrigue beyond just that of erotica. The naked female body is no less present in this new body of work, intensified even, by the emphasis on a singular subject in all its contorted glory.

In Upright, Arno explores the individual figure as an expressive vessel for narrative and fiction. The works, in their selective disclosures and seemingly intensified withholdings, feel more inscrutable and cryptic than ever before. Selectively revealing, they offer entry points into the artist’s larger than life world of beautifully misshapen fictions and symbolic hooks.